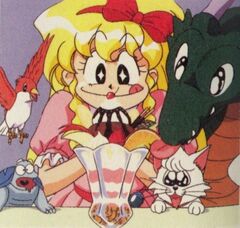 A Parfait is a food item that recovers health.

Its first appearance was as a food item for Maria Renard in Castlevania: Rondo of Blood and later Castlevania: The Dracula X Chronicles. In Castlevania: Symphony of the Night, it gives 16 HP, which is the second highest amount given by a dessert. It gives one more HP than the Ice Cream and one less than the Pudding. It can only be obtained with a Meal Ticket in that game.

Another type of Parfait called a Tropical Sundae appears in Castlevania: Portrait of Ruin.

Retrieved from "https://castlevania.fandom.com/wiki/Parfait?oldid=250181"
Community content is available under CC-BY-SA unless otherwise noted.