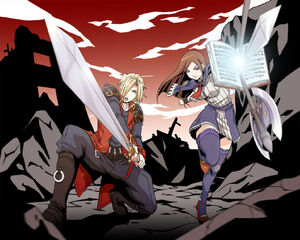 The Partner System is a gameplay mechanic first introduced in Castlevania III: Dracula's Curse and re-implemented more than fifteen years later in Castlevania: Dawn of Sorrow, otherwise serving as an inspiration for the multiplayer game Castlevania: Harmony of Despair. This system allows the game to have more than one character playable at the same time, either by alternating turns between them or by having both characters on the field at the same time, letting the player take control of one while the other is being controlled by the computer.

After Dracula's Curse, and starting with Rondo of Blood, some sequels adopted a gameplay system where the player had to pick only one protagonist at the beginning of the game (generally from two available) and then play the entire game through their own storyline, sometimes having different stages or sections specific to each character and usually unlocking more characters once the game was completed. It was not until the release of Dawn of Sorrow in 2005, that a partner system saw again the light of day, opening new gameplay possibilities in a world where gaming was rapidly evolving toward multiple players around the world playing in the same game.

Dual Crush is a special ability that allows two characters to combine their attacks in order to deal massive damage on a group of enemies. This gameplay mechanic was introduced in Portrait of Ruin and later implemented in Harmony of Despair.

The partner system (called "partner spirits"[1] in the instruction booklet) was first introduced in Dracula's Curse. In this game, the player takes control of Trevor Belmont as the main protagonist, and throughout his journey he's able to enlist the aid of new partners, all whom have their own reasons to destroy Dracula. Depending on the "paths of fate"[1] the player takes, they may encounter new allies who will offer their assistance. Trevor may then opt to recruit them or not. If another character is already in his coterie and he accepts the aid of a new character, the former will wish them good luck and part on his or her way.

Three characters can be recruited in this adventure:

Depending with which partner the game is completed, a different ending will play explaining their fate after the demise of Dracula's Castle.

While being able to play a game using different characters was nothing new at the time Dracula's Curse was released, the idea of being able to switch between them in the middle of a stage was very innovative; more so with them being so different between one another and having their own strengths, weaknesses and specific abilities. In fact, some players who dismissed the game's instruction booklet or had access to the game via rental, didn't realize at first they could switch between characters until accidentally pressing the SELECT button on the control pad, which triggered the change to take place.

Once the game has been completed and Julius Mode unlocked, the player can choose to start the game again, this time as Julius Belmont, the powerful vampire hunter. Throughout his storyline, he will be aided by two characters in his quest to stop Soma, who finally succumbed and accepted his place as the next Dark Lord:

This roster of characters mimics those appearing in Dracula's Curse. Hammer was supposedly going to take the place of Grant Danasty, but was scrapped from the final product.

The Partner System is the bread and butter of this game's combat. The player can call or cancel an ally using the A button. It is also possible switch to a character any time by using the X button. Many relics in this game utilize the Partner System, as they provide commands suitable for dual character control, such as jumping over another's shoulders, using an attack, or simultaneously pushing a large object. The HP and MP bars are shared as one, as the player controls one character, the other becomes AI-controlled. Only the player controlled character loses HP if he/she gets damaged and likewise, the AI-controlled character consumes MP upon damage (unless the player equips the Engagement Ring, which makes the partner consume HP when hit). If the player has run out of MP, the AI-controlled character will vanish and the player can simply call him/her again when the MP regenerates. This mechanic where a computer controlled ally uses the Hearts to perform an ability at the expense of its life force is similar to the way the Innocent Devils work in Castlevania: Curse of Darkness. Game Over only happens if the player-controlled character runs out of HP. Although it is sometimes recommended to cancel an ally when passing through environmental traps to avoid unnecessary MP reductions. Lastly, the player can command the partner to move to a specific area by touching that area on the screen. The two other modes likewise implement this:

The player should also keep in mind that the AI-controlled character is immune to debuffs. Should one character be Cursed, it is advisable to switch control to the other character to negate its effect until the debuff wears off.

Many characters are present in the game field at once since this is a multiplayer game. Most Dual Crushes from Portrait of Ruin are also implemented here.

Retrieved from "https://castlevania.fandom.com/wiki/Partner_System?oldid=250991"
Community content is available under CC-BY-SA unless otherwise noted.