Persephone is an enemy in the Castlevania series. She is a demonic maid that served a noble master.

Persephone is named after a Greek goddess of seasons and queen of the Underworld, being the wife of Hades. Due to being kidnapped and later tricked into being permanently bound to the Underworld, Persephone must spend half a year with her husband as queen of the dead (Fall and Winter), but can spend the rest of the year with her mother, the goddess Demeter (spring and summer). Her Latin name was Proserpina.

Nonetheless, why the Castlevania Persephone is portrayed as a demonic maid is anyone's guess.

Persephone is a demonic maid who serves Dracula within the castle. She is very polite and will usually bow to enemies before attacking. Persephone uses hand-to-hand combat to battle intruders. Sometimes she will use her vacuum to suck-in her victim's clothes. She is also vulnerable to vacuum-type attacks such as Soma's Devil Tornado and Magic Vacuum (which is Persephone's own soul), or Charlotte's Dark Gate and Tempest spells, as those attacks attempt to suck her skirt, stunning her as she tries to hold it in place.

These maids are rare inhabitants of Count Dracula's Tower. They initially wait patiently for the player to draw near before evading their attacks by back-flipping, time during which they are invincible. While in this flipping motion, they will sometimes throw a barrage of daggers in five different directions. If damaged without being killed, they will turn more vicious-looking and take to hovering, gaining the ability to generate blue flames from their hands which they will toss at the ground, each breaking into four smaller fireballs with homing capabilities.

Persephone appears in the Inner Quarters area of the castle, where they will do a polite curtsy and greet Soma in Japanese before attacking him. They attack by unleashing various kicks. When defeated, they collapse to their knees and fade away.

Gaining dominance over Persephone's soul grants Soma the Magic Vacuum ability, which allows him to steal and absorb HP from enemies through the use of a demonic vacuum.

Persephones now appear in Celia's headquarters, where they take care of the Demon Guest House with extreme dedication. They wear a classic purple maid dress, with simple shoes and simple maid headband. They also have blue hair tied in a ponytail fashion. When one is met, she normally greets the enemy before going into a battle stance and then starts attacking with swing kicks. She's easy to tease by using a sucking effect soul on her, or if she's near a defeated demon who is being sucked back to their realm, which causes her skirt to be pulled, embarrassing her as she holds her skirt tightly. Defeating her will envelop her in flower petals as she vanishes.

Like in the previous game, gaining dominance over her soul grants Soma the Magic Vacuum ability, which allows him to steal and absorb HP from enemies, although this time it can be leveled up three times (up to Level 9) by catching 9 Persephone's souls.

Persephone appears in the Great Stairway area of Dracula's Castle and also in the Sandy Grave. Her vacuum has interesting effects dependent on whoever is being controlled by the player; while Jonathan merely gets his coat stuck on her vacuum, should Charlotte Aulin be near the vacuum, her skirt will be pulled and she will hold it down.

Concept art from Dawn of Sorrow.

Art from Konami's web site for Portrait of Ruin.

Persephone, Lerajie and Larva from a special wallpaper available at the Portrait of Ruin website. 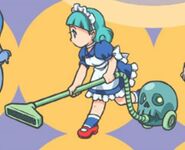 Persephone's illustration from Portrait of Ruin.

Harmony of Despair gamerpic.
Add a photo to this gallery

Retrieved from "https://castlevania.fandom.com/wiki/Persephone?oldid=309109"
Community content is available under CC-BY-SA unless otherwise noted.