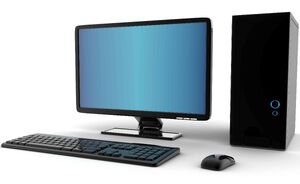 A personal computer, commonly abbreviated simply as PC, is usually a microcomputer whose price, size, and capabilities make it suitable for personal usage.

The user of a modern personal computer may have significant knowledge of the operating environment and application programs, but is not necessarily interested in programming nor even able to write programs for the computer. Therefore, most software written primarily for personal computers tends to be designed with simplicity of use, or "user-friendliness" in mind.

By the mid-1980s, "home computer" was becoming a less common label in favor of "personal computer". These computers were pre-assembled and required little to no technical knowledge to operate. In today's common usage, personal computer and PC usually indicate an IBM PC compatible. Because of this association, some manufacturers of personal computers that are not IBM PCs avoid explicitly using the terms to describe their products.