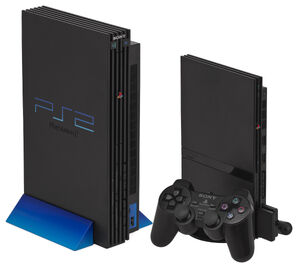 The PlayStation 2 (commonly abbreviated as PS2) (known in Japan as プレイステーション2 Pureisutēshon 2) is Sony's second video game console and the successor to the original PlayStation. Its development was announced in March 1999 and had a press conference in September later that year. The system was first released in Japan on March 4, 2000 and in North America and Puerto Rico on October 26, 2000. It later made a release in Europe on November 24, 2000. It primarily competed with the Sega Dreamcast, Nintendo GameCube and Microsoft’s original Xbox.

The PlayStation 2 is part of the sixth generation era of gaming and has become the fastest selling gaming console in history, with over 100 million units shipped worldwide by November 2005, thus beating the previous record holder, the PlayStation, by three years and nine months.

Retrieved from "https://castlevania.fandom.com/wiki/PlayStation_2?oldid=307592"
Community content is available under CC-BY-SA unless otherwise noted.