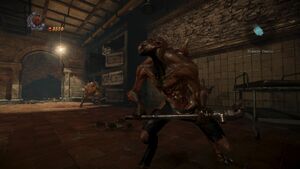 Possessed Citizens are the formerly human residents of Castlevania City turned into deformed beasts. They mutated into the creatures they are now as a result of the toxic gas developed by the Acolytes through the Bioquimek Corporation in order to pave the way for Satan's return. They first came about after Raisa Volkova purposely released the gas and infected her team of Bioquimek Scientists, and from there spread throughout the rest of the city. That said, there is still hope for the ones who survive the night to be cured. Though seemingly animalistic, these creatures retain some degree of human intelligence, as demonstrated by their appropriation of firearms and tools as weapon. These monsters can also project their acidic bile a considerable distance if a target is out of reach.

These enemies act as the basic grunts of the city sections of the game, much like the Brotherhood Soldiers and Dishonored Vampires of the castle sections. 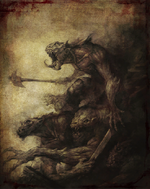 Like ever other night, millions of citizens left their jobs suffocated by their insignificant daily concerns. They would never have imagined that a macabre virus was about to turn them into grotesque bloodthirsty beasts.

After the initial spasms that violently deform their body, these spawns of evil are ready to wreak havoc in the streets and massacre the survivors as new members of the Army of Satan.

Retrieved from "https://castlevania.fandom.com/wiki/Possessed_Citizen?oldid=285308"
Community content is available under CC-BY-SA unless otherwise noted.