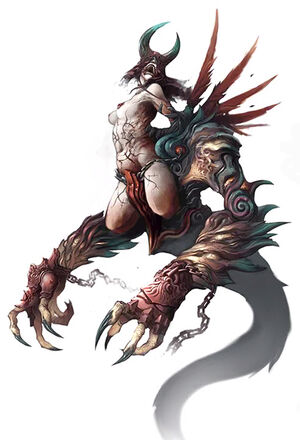 It first appears in the fifth level of Chapter II, Agharta. Gabriel witnesses a mysterious girl summoning it (via a Dark Crystal) to kill a nearby Cave Troll before she quickly and nimbly climbs one of the ruined buildings nearby and, without saying a word, beckons Gabriel to follow. Later on, Gabriel can summon it via the Dark Crystal sub-weapon.

After becoming Dracula, Gabriel kills one of these demonesses when it was used against him during a battle with Victor Belmont in Castlevania: Lords of Shadow 2.

One possible origin for these strange creatures can be seen in the clocktower, where a statue of a man appears to be dragging an angelic woman into flames, the angel's belly has a marking identical to the crystal demon's.

Artwork from Lords of Shadow
Add a photo to this gallery

Crystal Demon from Lords of Shadow

Crystal Demon from Lords of Shadow 2

An angelic woman in the The Clockwork Tower that bears an uncanny resemblance to the Power Crystal Demon.

Retrieved from "https://castlevania.fandom.com/wiki/Power_Crystal_Demon?oldid=256734"
Community content is available under CC-BY-SA unless otherwise noted.