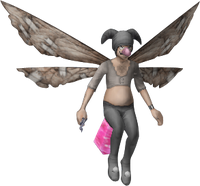 The Proboscis Fairy is a very special Level 4 Fairy-Type Innocent Devil found in Castlevania: Curse of Darkness. It resembles a slightly overweight middle-aged man with torn fairy wings kept together with scotch tape, and wears a hat with what appears to be a pair of antennae.

The Proboscis Fairy is an important Innocent Devil worth spending the effort it takes to evolve it. His Press It And See ability gives access to a whole new area in Aiolon Ruins, where many valuable treasures can be found. However, his other abilities are not as useful, as his Just A Little ability requires gambling constantly until giving Hector a major heal, Refresh only cures Hector from status ailments, which doesn't occur that often, and Skull Bomb only damages surrounding enemies minimally and can also damage Hector if he doesn't block or get away from the blast. However, Skull Bomb can be very useful during the battle against Death, as it will reduce 25% of his HP bar with a single blast.

The Proboscis Fairy can be obtained by evolving a Honey Bee with 90 Special Evo Crystals. Since he is a Level 4 Devil, he cannot be evolved any further.

The following table represents the stat gain per level of the Proboscis Fairy.[1]

Proboscis Fairy's evolution tree
Add a photo to this gallery

Retrieved from "https://castlevania.fandom.com/wiki/Proboscis_Fairy?oldid=285788"
Community content is available under CC-BY-SA unless otherwise noted.