Not to be confused with Back Dash or Dodge. 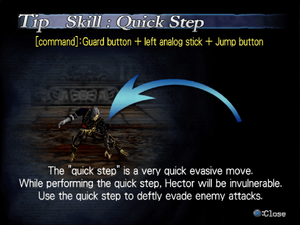 Quick Step is a skill in Castlevania: Lament of Innocence and Curse of Darkness. It can be considered to be the Back Dash counterpart for some 3D games in the Castlevania series and it allows the protagonist to perform an evading maneuver in any direction. While this move is being performed, the player will be invulnerable to any form of attack.

An upgrade of this move, known as Quick Step 2 or Double Step, allows the player to follow a Quick Step immediately with another one for further evasion.

Quick Step is learned just after defeating the first three enemies in the game, which will always happen during the tutorial.

To learn Quick Step 2, Leon must defeat 110 enemies, 25 of which must be from different types.

Quick Step can be acquired almost at the beginning of the game, in the first room of the Abandoned Castle where Hector must defeat all enemies in order to proceed.

Double Step can be acquired in a room of the Abandoned Castle's second floor, in the same room with the stairs that lead to the third floor.

Retrieved from "https://castlevania.fandom.com/wiki/Quick_Step?oldid=281408"
Community content is available under CC-BY-SA unless otherwise noted.