Leaps and bites at the player

The Rat or Mouse can be either an enemy or a quest item in the Castlevania series. They were first introduced in Castlevania II: Belmont's Revenge, where they appear as ghoulish versions of a common rat, having strong and bulky rear limbs and attacking by leaping and biting their prey. As the series progressed, their appearance became more like that of a common rat or a mouse.

In Belmont's Revenge, they behave almost exactly as the Under Mole from Castlevania: The Adventure, by hiding inside several holes in the Rock and Plant Castle's walls, and leaping at Christopher while trying to bite him as he approaches.

A little rat can be found in the previous room before facing Dogether. If approached, it will flee to its rat hole, but if the player is able to kill it (by attacking it through the wall), it will randomly drop either a money bag, a good sub-weapon or even a 1UP. When the hole that the rat was trying to or succeeded to flee towards is broken just like any breakable block or wall, it will reveal a cheese food item.

The "Mouse" is an NPC and also a quest item in Order of Ecclesia. It can be found roaming the chambers of the sunken ship in Kalidus Channel. It must be brought to Anna in order to complete her second quest: "Mice Make for Good Eats". However, the mouse can only be interacted with after the quest has been given.

In The Adventure ReBirth, their appearance is more similar to that of a common rat, but with gigantic proportions.

In Lords of Shadow 2, Dracula has a stealth ability called Plague of Rats which allows him to blend into a group of nine rats wandering near a "Shadow Portal". With this ability, he can access tight spots which are inaccessible by normal means. However, these rats are very vulnerable to hazardous traps and enemies when detected. In this form, the player must keep at least one rat in order for Dracula to survive. Re-entering a Shadow Portal will restore the number of rats to nine.

In the parody game, Sexy Parodius, the Dracula's Castle stage features a whole host of mice which came out of the background's walls, just like the Rats and Under Moles from the Castlevania series do. These mice also parody a number of other Castlevania denizens. 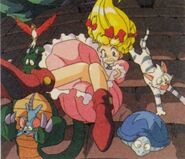 The rat from Rondo of Blood

Mouse from Order of Ecclesia
Add a photo to this gallery
Retrieved from "https://castlevania.fandom.com/wiki/Rat?oldid=258833"
Community content is available under CC-BY-SA unless otherwise noted.