Having the World
Walk Away
The Great Work
Death Magic

"War is when you kill so many of the other side that they can't fight anymore."
— Ratko in "The Great Work"

Ratko (ラッコ, Rakko?) is a character in the Castlevania animated series.

He was voiced by Titus Welliver in the English version of the show.

Not much is known of Ratko's backstory, other than he's been alive for a few centuries. He's skilled at fighting battles and committing murder, not just killing, for both himself and under the employ of others. At some point, he came to ally himself with Varney and works with him in order to fulfill his goal of resurrecting Dracula.

Ratko is with Varney as they lead a group of vampires in an attempt to purge the survivors of Targoviste, and is there when the two witness Trevor Belmont and Sypha Belnades putting up a defense. The two are next seen having put up a trap for the Targoviste underground court guard but end up encountering the two vampire hunters again.

While Varney attempts to gather the resources and people needed to resurrect Dracula, Ratko continues his task of finding the underground court. After setting up a way to track the court soldiers to their base using divining and successfully finding it, Ratko gets into an argument with Varney when the latter attempts to take credit for the discovery. Ratko explains how he's different from the petty criminal and egotist that Varney is in that Ratko considers himself a solider that fights wars.

When Ratko and his vampires make an assault on the underground court, he pairs off against Trevor Belmont, commenting on how he's glad he finally found someone worth fighting. The two battle, with Ratko getting the better of the battle-weary Trevor until two court survivors distract him. When he attempts to kill them, court head guard Zamfir takes the attack and distracts Ratko long enough for Trevor to impale him with his cross glaive, killing the vampire.

Ratko considers himself a war expert. He does this under the belief that war is simply killing enough people on the opposite side so they can no longer fight. Ratko employees vicious and brutal war tactics that would be considered war crimes by most cultures.

Ratko is one of the most talented vampire killers in the world. He takes great pride in his skills, especially in killing humans becoming angry when Varney insults them. That being said, he does still enjoy a good challenge and was disappointed when Trevor was at a disadvantage against him in their fight.

Despite his talent, Ratko has a low place in the vampire hierarchy. Finding himself working for "witty" vampire lords who are lesser in killing talent. Ratko hates working for these vampires, feeling he must hide his mind and talents to avoid hurting their egos. He wants nothing more than to flex his full talent by killing worthy opponents. 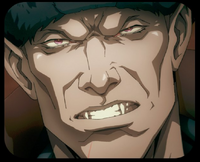 Varney and Ratko in the Season 4 trailer.

Ratko discusses being a soldier.

Layout and key art for Season 4 Episode 1 by Sam Deats.
Community content is available under CC-BY-SA unless otherwise noted.
Advertisement