Reverie is the name of the first downloadable content (DLC) pack for Castlevania: Lords of Shadow. It was announced by Konami in December 2010 and released for PlayStation 3 on March 22, 2011 on the US, on April 19, 2011 for Xbox 360 worldwide, and on April 20 for PlayStation 3 on the rest of the regions. It was followed by Resurrection, which was released on June 7, 2011 on Xbox Live Arcade, and June 21, 2011 on PlayStation Network. It features the return of Laura, who is playable in certain sections.[1]

Reverie has not been scheduled in Japanese version yet.

In Castlevania: Lords of Shadow - Reverie, players will return to the Castle as Gabriel to help Laura, the former servant to the vampire Carmilla, in destroying the unruly evil that was previously kept in check by the recently slain Queen.

Laura summoned Gabriel in the castle. By killing the three Lords of Shadow, Gabriel unleashed a new menace: the Forgotten One, an incredibly powerful demon whom the Brotherhood imprisoned deep in the center of the Bernhardt castle. Laura and Gabriel must find the entrance to the ancient fortress of the Brotherhood.

After opening the gate to the Brotherhood fortress, Gabriel and Laura travel through the ancient castle. They gather the blood of the three founders in order to open the gate to the Forgotten One's chamber. However, only dark beings can enter into the dimension where the Forgotten One is kept. To bypass this, Laura asks Gabriel to drink all of her blood. As a consequence, Laura dies and is thus freed from her eternal torment, while Gabriel becomes a creature of the night and steps through the gate to confront what awaits him. 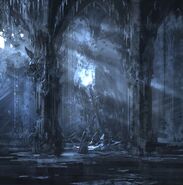 Retrieved from "https://castlevania.fandom.com/wiki/Reverie?oldid=280967"
Community content is available under CC-BY-SA unless otherwise noted.