"Die monster. You don't belong in this world!"
— Richter to Dracula in Symphony of the Night

Richter Belmont (リヒター・ベルモンド, Rihitā Berumondo?, Richter Belmondo) is a descendant of Simon Belmont and Juste Belmont. He is a renowned vampire hunter. He is the main protagonist of Castlevania: Rondo of Blood and has reappeared frequently as a supporting character in later games. Every generation of the Belmont Clan has produced tougher, more dedicated vampire hunters — yet Richter stands as one of the most powerful in the family. Brandishing the legendary sacred whip which so many of his predecessors wielded, this hot-headed youth pushed Dracula to the brink.

Count Dracula, resurrected by evil humans led by a dark priest called Shaft who sacrificed a young virgin female's blood and life, commanded his forces to kidnap Richter's girlfriend, Annette, from the village of Aljiba, alongside the villagers Maria Renard, Tera and Iris, among many others. On his way to the village via wagon, Richter was ambushed by Dracula's second in command, Death, with the latter also "testing" him by using various attacks on him. After Richter dispelled the attacks, Death took his leave, although not before vowing that he wouldn't go easy on the vampire hunter in their inevitable next encounter. After ridding the town of creatures of the night, Richter, obligated to battle the Dark Lord in every incarnation, slayed the Count's massive army –including Shaft– alongside Maria, who joined his quest after rescuing her, and together arrived in time to both save the women and defeat Dracula — proving to himself that he was worthy of his vampire-hunting destiny.

Shaft, who had somehow survived the events of Rondo of Blood by preserving his soul inside an invisible crystal ball, managed to manipulate Richter four years later to be the new master of the castle and aid him to revive Dracula, acting as the ultimate guard so nobody could stop his schemes. Richter was manipulated because he was not feeling totally pleased with his victory over the Count, as he told Alucard: "Dracula rises once a century. One chance for each Belmont to shine, and then we're finished, forgotten. If I bring him back now, the battle can last for eternity!". It was Alucard who arose from his slumber, braved the evil castle, and with Maria's help figured a plan to release Richter from the evil control. Alucard fought him and freed Richter from the possession by destroying Shaft's crystal ball, severing the link between him and the hunter, and then moved on to stop the evil priest who later revealed that he brainwashed Richter because, due to his status as a Belmont, he was supreme among vampire hunters and thus could not be defeated in a straight up fight between various ones, effectively acting as a deterrent regarding anyone trying to stop Dracula's resurrection. Alucard then proceeded to face his father for the second time, while Richter and Maria awaited for him outside the castle.

After the events of Symphony of the Night, Richter quit the vampire hunting job ashamed for being manipulated by Shaft, but wields again the sacred whip, the Vampire Killer, to help Maria and Alucard. Richter sends a letter to Maria, warning her about vampire attacks in the village that she and Alucard were staying in, he also tells her to be wary of the vampire.

It wasn't long before Richter tracked down the vampire attacks. There, he encountered Cyril and Alexis, the self-proclaimed vampire hunters. He rescued them from a skeleton, making himself known.

Later on, Richter rescued Maria, who was hurt by the potion Cyril made, and brought her back to Alucard. There, he told him that the ones closest to him would be sacrificed once he gave in to his vampiric urges. He advised Alucard to tell Maria why he was letting her to stay with him.

On his journey to find the vampire responsible for the attacks, he met Cyril again. He told Richter that Alexis had been kidnapped by a black-winged demon. Richter immediately knew it was Magnus and set out with Cyril to rescue Alexis.

Richter and Cyril finally met up with Alucard for the final battle against Magnus.

This is an optional choice, up to the player, and if they choose to do so, the sisters accomplish this by sending Jonathan into another realm to fight the living memory of the last full Belmont to wield the whip — Richter Belmont. Richter fights the player using Daggers, Crosses, Holy Water, Axes, Grand Cross, a fast Dash strike and a fully powered version of the Vampire Killer. Once Richter's illusion is defeated, Jonathan's whip becomes one of the most powerful weapons in the game.

"Die, you don't belong in this world! As long as I am needed, I will keep fighting."
— Richter's official profile tagline (translated)

"A descendant of the Belmont Clan who defeated Dracula in 1792 to rescue the people who were captured by him. In 1797, he was controlled by the Dark Priest Shaft and became the temporary Lord of the Castle. Although he was released from control when Alucard came, he still couldn't forgive himself. He handed the holy whip to the Morris family and then lived in seclusion." (translated description from the official website)

Richter debuted in Rondo of Blood for the PC Engine, where he was designed by Kouji Yamada, Reika Bando and Toshiharu Furukawa. Richter's original design was heavily inspired by protagonists of popular shōnen anime from the time (e.g.: Fist of the North Star). He is equipped with a blue uniform, long white pants and boots. The sleeves of his uniform are ripped from the part of the shoulders. He has short, brown hair all outfitted with a white bandana. 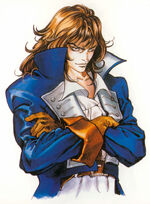 Richter has a strong sense of justice and unwavering will mixed with a youthful and hot-headed attitude. This is because he was the youngest Belmont at the time to fight against the fully resurrected Count Dracula. The power of his youthful energy manifests in the form of Item Crashes, where he draws even more power out of his sub-weapons. Richter is also shown to be very kind and caring to others, such as Maria Renard, Tera and Iris, even though they don't have a personal connection to him. Despite being referred to as reckless by Annette, Richter does display caution at times. An example of this is when Maria asks to go with him to defeat Dracula, which Richter finds amusing but absurd, saying it would be too dangerous for her. He does eventually relent after witnessing her power and determination. Despite all his good traits and intentions, Richter enjoyed the thrill of battle so much that he felt empty after his defeat of Dracula, and felt like his usefulness in the world was over. It was these hidden feelings that he would act upon when he was possessed by Shaft, and would attempt to resurrect Dracula so that he could battle the Dark Lord again. When he was freed of his delusion, he immediately expressed remorse and shame for what he had done. This regret caused him to disappear from the world and live in seclusion so that he and future Belmonts would get used to living in peace, and wouldn't be exploited by the desire for battle. Richter displayed great faith in the Morris Clan by passing the Vampire Killer to them, trusting them to protect the world in the Belmont's absence.

As his second appearance as a boss in Portrait of Ruin, Richter is the only memory of the Vampire Killer. He's an optional boss; if you defeat him, the whip becomes stronger and one of the best weapons in the game.

Richter is also playable in one of the game's alternate modes, along with Maria Renard as his partner. This mode can be unlocked after completing a game where Whip's Memory has been defeated. Richter plays much as he did in Rondo of Blood, except that he lacks item crashes. This mode has no story. 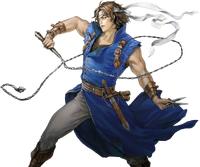 Richter appears as a playable support character in Castlevania: Grimoire of Souls.

Richter was confirmed to appear in an upcoming Netflix series that serves as a sequel/spin-off to the previous Castlevania animated series, also by Netflix.[3]

Richter's sprite from the canceled game "Castlevania: The Bloodletting".

Fake Trevor's sprite from Castlevania: Symphony of the Night.