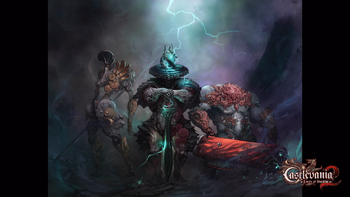 The Riders of the Storm are a group of three statues animated by Nergal Meslamstea. They each represent an aspect of the storm: Thunder, Lightning, and Wind. They confront Dracula at the top of a tower in his castle.

The battle ends after Dracula crushes all three statues, one by one. During the process, Nergal transfers a portion of his power into another statue after it is destroyed by Dracula. With Thunder being the last to be obliterated, Nergal assumes his physical form in a very weakened state.

Three Imposing stone statues top one of the castle's tallest towers. They represent Wind, Lightning, and Thunder. The riders of the storm, born of the legend of the East, come down to Earth to collect the riches of the men who have asked for favors from the heavens.

Nergal, making use of his ability to possess objects, divides his demonic essence to get inside the three figures, give them life and set their mythical powers against Dracula.

The hissing spear, the shining sword, and the thundering battering ram now point at the neck of the Prince of Darkness, coming to life in the name of Satan.

Retrieved from "https://castlevania.fandom.com/wiki/Riders_of_the_Storm?oldid=205897"
Community content is available under CC-BY-SA unless otherwise noted.