Robert "Robbie" Belgrade is an American musician and voice actor currently residing in the San Francisco bay area. He was the original English language voice actor for Alucard in the PlayStation version of Castlevania: Symphony of the Night. He was replaced in later ports of the game by Yuri Lowenthal, although he would later reprise this role in the fan game Castlevania: The Lecarde Chronicles 2.

Belgrade is well known to gamers for narrating several games in the Tekken series, as well as for voicing characters like Signas in Mega Man X7 and Rock in Soul Blade. 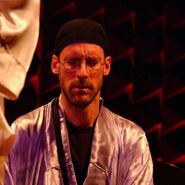 Retrieved from "https://castlevania.fandom.com/wiki/Robert_Belgrade?oldid=256659"
Community content is available under CC-BY-SA unless otherwise noted.