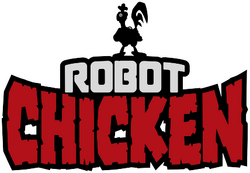 Robot Chicken is an American stop-motion animated comedy television series created and executive-produced by Seth Green and Matthew Senreich, along with co-head writers Douglas Goldstein and Tom Root. The writers, especially Green, also provide many of the voices. Senreich, Goldstein and Root were formerly writers for the popular action figure hobbyist magazine ToyFare.

The episode Maurice was Caught from Season 4 includes a parody sketch of Castlevania titled "Is that a Whip?", featuring models based on Simon Belmont's and Dracula's NECA action figures.

Simon Belmont storms into Dracula's castle one night and two butlers attempt to stop him revealing themselves really to be wolf men. When Simon takes out his whip, they start making fun of him, only to be immediately subdued and forced to lead him to their master's chamber. Dracula faces Simon and also mocks him for using a whip to fight against the powers of darkness, only to be subdued too while he attempts to escape by transforming into a bat. The two wolf men watch everything from outside a nearby window and comment that Simon could be just a sadist with a whip fetish.

The two wolf men seem to have been inspired by the Vampire Villagers from Castlevania (N64).
Add a photo to this gallery

Retrieved from "https://castlevania.fandom.com/wiki/Robot_Chicken?oldid=260398"
Community content is available under CC-BY-SA unless otherwise noted.