Rowdain is the boss of the first stage, The Ruined Mansion. He is a skeletal horseman riding on an equally skeletal steed, which has the ability to spew fireballs at the player.

Once the horse has sustained enough damage, it will die, leaving Rowdain to fight on foot with his lance. He will then start performing high leaps into the air and try to land on top of Simon to stab him with it.

Once his HP has been reduced to 1, he will fake his death by exploding into a mass of bones, only to reform again immediately in a final attempt to harm the hero. 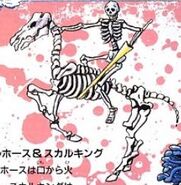 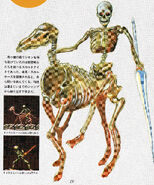 Rowdain from the All About Akumajō Dracula guide for Super Castlevania IV
Add a photo to this gallery
Retrieved from "https://castlevania.fandom.com/wiki/Rowdain?oldid=273707"
Community content is available under CC-BY-SA unless otherwise noted.