The Sand Worm is an enemy in the Castlevania series. It is an enormous worm that resides in the sand. It builds a sand trap around it and waits in its center to feed on any unsuspecting preys who happen to fall inside it.

The sand worm from the Egyptian desert of Boku Dracula-kun acts much like its icy counterpart, Rahab, and like other flying dragons from previous games. It can enter and exit a variety of holes in the ground, and comes out floating in looping patterns.

Called Pakkun, it is known for its insatiable appetite. Only one is encountered in the entire game, in the crystal cave below the Courtyard. This creature lies inside a trap-pit with slippery slopes and will quickly spring out and attempt to swallow Simon whole if he tries to jump over it. It's best avoided by using the nearby Stopwatch sub-weapon.

After crossing a Mummy-infested desert near the beginning of the Sandy Grave, Jonathan and Charlotte arrive to a big mound of sand. While stepping on it, the ground suddenly splits apart and a giant Sand Worm emerges from the center of what now is clearly revealed to be a sand trap dragging the heroes toward the monster. Once defeated, the worm contorts violently in a shower of blood. If the heroes let themselves get swallowed by the now vacant sand trap, they'll be able to wander its interior, where an HP Max Up can be found (this is actually a tutorial for when the player later reaches the Forgotten City, where the main area has to be entered the same way, by letting oneself get swallowed by the quicksand after fighting a Poison Worm, which is an alternate version of the Sand Worm).

Another Sand Worm awaits at the rightmost wing of Sandy Grave, although this time its lair cannot be entered.

Interior of the Sand Worm's sand trap in Portrait of Ruin 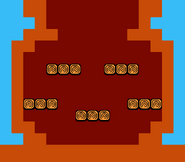 Interior of a vase in Super Mario Bros. 2

Retrieved from "https://castlevania.fandom.com/wiki/Sand_Worm?oldid=290986"
Community content is available under CC-BY-SA unless otherwise noted.