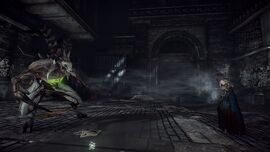 Satan's Soldiers are demons in Satan's army. Dracula fights them in Lords of Shadow 2. They have a goat-like appearance and spit acid. A soldier of Satan is the first enemy that Dracula encounters in the game, though, as he is greatly weakened, he is no match for it and is only saved by the timely interference of Zobek's lieutenant. One such soldier, and the first to be defeated by Dracula's hand, is fought on the train, and is distinguishable from the other soldiers by its different coloration, facial features, and unusual endurance. After its defeat, Satan's soldiers begin to regularly appear in the city as enemies.

Once the doors of the Avernus were opened, demonic hordes began to invade the earth, unleashing terror and despair among mankind. Pity does not exist for the soldier of Satan, who carve up their victims with knives of bone and drain their souls through the festering amber bladder that grows on their chest. The brilliant light of the underworld shinning from their thorax alone seems to give them an uncommon strength.

The less fortunate citizens have seen their inner demon unleashed. It is a phantasmagorical snake, with a voracious appetite, capable of breaking through walls, armor and flesh with its powerful jaws.

Satan' Soldiers act as upgraded versions of the Possessed Citizens (besides the obvious differences). As such they can ram into Dracula with their horns, deliver a headbutt to knock him down, send out a forward shockwave with a stomp, strike with their bone arms. When at a distance they will spit out acid that traps the player in place and can summon a phantom serpent from their bodies that will strike if Dracula gets close (can be knocked out of the summoning with a Shadow Dagger, Void Projection or a Chaos Bomb). When defeated, the demon will go into a short series of spasms before self-destruct, which can harm the player if they don't avoid the blast. 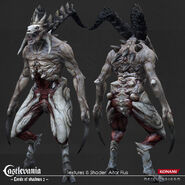 Retrieved from "https://castlevania.fandom.com/wiki/Satan%27s_Soldier?oldid=285311"
Community content is available under CC-BY-SA unless otherwise noted.