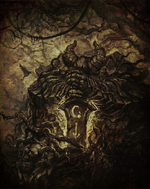 The Seal of Alastor is a Relic that Dracula obtains in Castlevania: Lords of Shadow 2.

It can be shattered to unleash the soul of a legendary warrior, Alastor. Once activated, the Seal of Alastor unlocks all of Dracula's weapon skills regardless of his progress. This temporary access to a slew of powerful moves tilts the scales in Dracula's favor while it lasts. It also increases the mastery level of each weapon by one, increasing the amount of damage you can deal. The only downside is that you cannot gain mastery for your skills while the relic is activated.

The Seal of Alastor is based on the traditional enemy, Alastor, found in several other Castlevania games.

Alastor's artwork
Add a photo to this gallery

Retrieved from "https://castlevania.fandom.com/wiki/Seal_of_Alastor?oldid=248722"
Community content is available under CC-BY-SA unless otherwise noted.