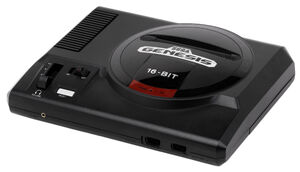 The Sega Genesis, known as the Mega Drive in most regions outside North America, is a 16-bit home video game console which was developed and sold by Sega Enterprises, Ltd. The Genesis was Sega's third console and the successor to the Master System. Sega first released the console as the Mega Drive in Japan in 1988, followed by a North American debut under the "Genesis" moniker in 1989, as Sega was unable to secure legal rights to the "Mega Drive" name in that territory.

Sega Mega Drive
Add a photo to this gallery

Retrieved from "https://castlevania.fandom.com/wiki/Sega_Genesis?oldid=311615"
Community content is available under CC-BY-SA unless otherwise noted.