The Shadow Whip[1] (ダークシャドウ ウィップ Dark Shadow Whip in the Japanese version) is Dracula's neutral and main weapon in Castlevania: Lords of Shadow - Mirror of Fate and Castlevania: Lords of Shadow 2. It is a "whip" that he creates from his own corrupt blood which is bound by a supernatural force which hardens upon impact against his foes. It has many of the same moves and attacks as the Vampire Killer from the first game. 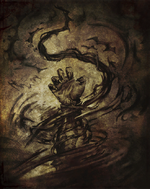 ~Gabriel's deeply rooted training with the Combat Cross remained in Dracula. The Prince of Darkness now uses his own blood, which takes the shape of a sinuous whip, to inflict pain and death wherever he goes. The dark fluid is bounded by a supernatural force, and it hardens on impact. Before they die, its victims feel as if thousands of fangs penetrated their flesh, breaking bones and tearing their life force from them.~

After emerging victorious against the Forgotten One, Gabriel renounced his old identity and shattered the Vampire Killer in his bare hand symbolizing his plunge into Darkness. Upon his return to the mortal realm Gabriel abandoned his old self and took the name "Dracul" (The Dragon) and ruled as the Prince of Darkness with the Shadow Whip at his disposal.

Dracula first displayed the use of the Shadow Whip against his -then unknown- son Trevor, along with the Void Sword and Chaos Claws. In the end he was victorious over his son, to his regret and horror upon discovering the truth. He would then use it again against his grandson Simon and Trevor, who had been reborn as Alucard.

After the unsuccessful siege of the Brotherhood of Light in Castle Dracula, Alucard talked his father through a plan to lure out and kill Zobek and Satan in order to save humanity once again. After agreeing, Dracula gave his consent for his son to impale him with the Crissaegrim to put him in a deep sleep for centuries. During this time the powers of his blood weakened reverting the Shadow Whip into its weakest manifestation. This time the player must embark on a journey to regain the powers of the Legendary Prince of Darkness and push the power of the Shadow Whip into its maximum potential.

The Shadow Whip manifests as a gauntlet made of the Prince's own Dark blood bound by a supernatural force on Dracula's right arm. From it the whip springs when he attacks. Like the Vampire Killer, it is the only weapon through which Dracula can Focus to extract blood orbs from his enemies to power his Void & Chaos powers.

Unlike the Vampire Killer, the Shadow Whip does not possess any other abilities such as the ability to grapple enemies or objects, or alternate means of killing, like the stake. This could be due to the fact that whip is only composed of Dracula's blood (though Dracula is seen lifting and choking Alucard with the Shadow Whip at the end of Act II of Mirror of Fate). However, this also means that the Shadow Whip is the only weapon that Dracula retains when he becomes weak after waking up in the modern age.

The Shadow Whip's appearance depends on Dracula's current level of mastery.  At its weakest level, the whip appears as simply a hardened strand of Dracula's corrupted blood.  At level 2, the blood takes on a dark maroon color and seems to be augmented with magic.  At maximum mastery level, the Shadow Whip becomes a bright, deep crimson red in color and becomes a full on mystical energy whip. It looks similar in appearance to the Vampire Killer's chain whip when augmented with Shadow Magic.

Mastering the Shadow Whip allows Dracula to increase its damage, and to increase the blood orbs from enemies. It also changes the visual manifestation in game.

Shadow Whip from Mirror of Fate

Area Attack from Lords of Shadow 2 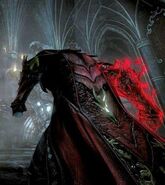 Vs Paladin
Add a photo to this gallery

Retrieved from "https://castlevania.fandom.com/wiki/Shadow_Whip?oldid=272325"
Community content is available under CC-BY-SA unless otherwise noted.