N/A: Judgment and Harmony of Despair

"I am the morning sun, come to vanquish this horrible night!"
— Shanoa to Dracula in Castlevania: Order of Ecclesia

Shanoa (シャノア, Shanoa?) is the heroine of Castlevania: Order of Ecclesia. She represents the Order of Ecclesia, the only group who seems up to the task of defeating Dracula in the Belmonts' absence. She is able to absorb Glyphs, which provide her with magical weapons and elemental spells. Although she is often pictured wielding an ethereal crimson-colored rapier, Shanoa can also use any other weapons granted to her by glyphs she has obtained.

Shanoa is able to equip three glyphs, much like Soma Cruz's souls. She can combine them to unleash devastating combos either with a spell or a massive weapon; such as a large Holy Claymore or a hail of daggers. The weapons range from scythes, axes, daggers, lances, hammers and swords, while spells range from summoning a fierce wind, lightning orbs, giant stone fists, fireballs, ice shards and blasts of light and/or darkness. Shanoa's glyphs also allow her to swing from place to place using magnetic forces or transform into monsters such as a cat-woman or a winged werebat.

"Shanoa is one of Ecclesia's female warriors. She joined the clan at a young age, and was groomed in her training to destroy Count Dracula. An accident during the Dominus ceremony wiped away her memories and emotions. Shanoa possesses a unique ability, allowing her to channel power through glyphs that are marked on her body."
— Official background

Shanoa was chosen as a vessel for Dominus by Barlowe. However, before the performing of the ritual, she was attacked by her adoptive brother and fellow Ecclesia member, Albus. Since that time, she has lost her emotions and memories. Upon awakening, Shanoa heard Barlowe's version of the events and received the order to retrieve him and Dominus from Albus.

She ventures toward Wygol Village after her first encounter with her estranged comrade in an abandoned monastery and travels through various dungeons across the land to pursue Albus and rescue the villagers he trapped. All while aiding them through Quests on the side. All of those trapped Wygol villagers have mentioned something about a "man" who imprisoned them in Torpor Glyphs. On several occasions, she meets Albus carrying a part of the Dominus Glyphs, and it was further revealed that he was actually behind the capture of these villagers. He offers the two parts of Dominus to Shanoa as "gifts", and without question, she willingly absorbs the two, believing that it was all for the mission entrusted to her by Barlowe.

However, at the Oblivion Ridge, Albus refuses to give her third Dominus Glyph to Shanoa. He instead explains to her the true nature of these glyphs; that the Dominus is a copy of Dracula's power himself, and the usage of the Dominus can lead to disastrous consequences on one's soul. Shanoa, feeling betrayed, returns to Barlowe, explaining the situation. She is then tasked to take the corrupted Albus down for good at the Mystery Manor.

The events that transpire at the manor plays a crucial role in determining the endings of the game. The following events will differ depending on if Shanoa successfully rescue all thirteen villagers or fails to save at least one. There are two possible routes to the ending this game which is explained after the fight between Shanoa and Albus.

After the battle, Shanoa finally absorbs the remaining part of Dominus. She heads back to Barlowe in Ecclesia, believing she has already completed her mission. The only remaining task is to execute the spell beside the coffin in order to "save the world". Unbeknownst to her, it was all lies and tricks by the old man, as she falls to the ground instead, losing consciousness, and her efforts presumably used to resurrect Dracula for Barlowe. The screen fades to black, showing the villagers who aren't saved yet, followed by the Game Over screen.

After the battle, Shanoa finally absorbs the remaining part of Dominus. After this process, she began hearing various conversations between Barlowe and Albus. It was revealed that the latter's plan to steal the Dominus was in order to save Shanoa from the threat of using the glyph. This scene also hints that Shanoa slowly remembers parts of her memories by calling Albus her "brother". The soul of Albus manifested as the voice, since it had been merged with the last part of the Dominus that she absorbed. His only advice was to avoid casting the union of Dominus at all costs. Shanoa heads back to Ecclesia to confront Barlowe. This time, she does not follow the magician's orders and he reveals his true nature as a madman who desires Dracula's revival. Furthermore, Barlowe also reveals that the "vessel" in his room was actually a seal that confines Dracula, and that he was manipulating Shanoa to revive him by breaking the seal all along. A fight breaks out between the two, resulting in Barlowe's defeat. However, he offered his life to Dracula's seal anyways despite Shanoa's objections, which then causes the dark lord and his his castle to arise again.

The heroine, now alone in Ecclesia, heads to the castle to banish Dracula, as she is the only one capable of doing the task. Shanoa battles Dracula at his throne room, not long after he would unleash his ultimate magic upon being defeated. However, if the union of the Dominus Glyphs is cast by the player, the spell will be countered, killing Dracula once again. The cost of this is Shanoa's life, but a turn of events occurred as the soul of Albus appeared once again, trading his own with Dominus for Shanoa's revival. Just at this moment, he requested her to smile again and she does, signifying that Shanoa has indeed recovered her memories and emotions. She is able to escape the castle just before it crumbles. It was later revealed that all records of Ecclesia were erased and destroyed, with Shanoa, or rather, a Grimoire-created facsimile of her, implying in Grimoire of Souls that the worlds' leaders at the time erased the records to save face regarding their being manipulated by Barlowe.

Shanoa is a serious, introverted, strong-willed and stoic woman. She is amnesiac, which means that she cannot remember her past at all. As such, it is clouded in mystery. Due to tragic events that have occurred in her early life, she doesn't remember her true name, her childhood, nor her birth family. She can come off as emotionless because of her difficulty expressing how she feels, and this is partly because of the inability to reminisce her past, but its not known to what extent her lack of memories affect her core personality.

She is endowed with a great level of tenacity, determined to find answers no matter what. She is extremely driven, and will stop at nothing with the strong desire to avenge Albus, vanquish Dracula, and more importantly, protect the ones she cares about.

Shanoa also has an artistic streak. During her occasional visits to Wygol Village over the course of her quest, she shows interest in photography, music, fashion, and illustration. She draws in her Sketch Book to exercise her creativity and uses her talent in an attempt to recollect her past or at least, find fulfillment in her life other than her mission.

Shanoa is able to equip a glyph on each arm and on her back. Arm glyphs can call forth close-range weapons like swords and spears, long range weapons like throwing axes and bows, or elemental attacks like fire and ice. Basically, she can utilize all the weapons and elements all the other vampire hunters in the series can use, with the notable exceptions of whips, vials of holy water and crosses. Each of these attacks consumes MP. Her left and right arm glyphs can be performed very rapidly if alternated one right after the other or can be combined in a powerful Glyph Union attack, which consumes Hearts rather than MP. Back glyphs give her an ability that she can turn on and off at will. 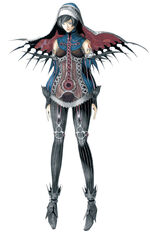 Shanoa appeared as an unlockable character in the 3D fighting game Castlevania Judgment for the Wii. She is unlocked through a Wii-DS connection option from the game Castlevania: Order of Ecclesia for the Nintendo DS, or by beating True Story Mode with her. Her outfit is something resembling a nun's. 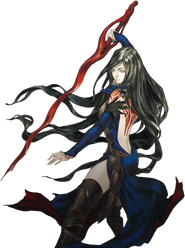 Shanoa's playability in the co-op game Castlevania: Harmony of Despair is parallel to her gameplay in Order of Ecclesia. The selection of glyphs available to her is limited because not all of them have returned from OoE, fewer enemies drop them, and obtaining one as a reward from a boss fight is much more challenging. In spite of these changes, each glyph can be increased in power the more they are used to inflict damage. Shanoa can use two glyphs as her primary attacks, and the player can select up to four sub-glyphs for her side abilities. Magnes is her only back-glyph.

Shanoa is a playable character in Castlevania: Grimoire of Souls. She can utilize Sickle and Spear Glyphs as well as Cats and Guns as sub-weapons. 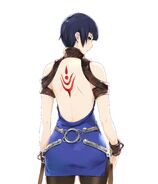