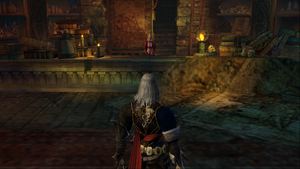 Shops appear in various Castlevania installments, where they primarily serve as the main hubs where the player can buy or sell items, weapons and accessories. Depending on the game they appear in, shop owners may also offer a number of different services not found in other games. In most cases, a non-playable character opens their business to aid the player; otherwise, a shop can just be accessed from the game's menu.

The items in a shop are usually bought with a common currency - gold - which can be accumulated in various ways. Throughout the games, these shopkeepers often have limited stocks, and new items and weapons become available as the player progresses more into the game. Likewise, the rarest or strongest items, accessories and weapons will become available in the shop with expensive costs after the player beats the game and revisits the shopkeeper.

The first appearance of a "shop" in a Castlevania game came in the form of a mysterious old woman in 1986's Vampire Killer: the Old Crone. Instead of offering her items via a list of wares, the player would instead have to strike her with their whip several times. For each hit, the Old Crone's robes would change color, each meaning a different service, like giving or taking away Hearts, changing the stage's difficulty, or offering an item for purchase. Also, depending on the color of Bible the player had acquired, she would increase or decrease her prices.

Stepping further from the gameplay mechanics of the first game to a more action/role playing oriented adventure, it was not a surprise to see shops appearing more prominently in Konami's Simon's Quest, from 1987. In this game, several traders come in the form of town merchant gypsies, each one offering a particular item for a price. Characteristic to this game is that Hearts are the main currency and not gold, like in the rest of the games. Most of these merchants can be found in towns, although some of them have enclosed themselves in secret rooms inside of their houses, trying to hide from the curse ailing the land. The player will then have to look for them by dissolving the walls of their houses with vials of Holy Water in order to make a transaction. There are others, however, who have chosen to make a temporary residence inside one of the five mansions where Dracula's relics are being guarded. These gypsies usually sell oak stakes to the player, in order to aid them in claiming the relic from each one of these unholy places.

Town merchants (and all villagers, for that purpose) only provide their services on daytime. When night befalls, they'll hurry to the safety of their houses and lock themselves up, waiting for the morning sun to vanquish the horrible night. As in-game time stops flowing while inside of a mansion, the player can trade with oak stake merchants any time they want to.

A mysterious cloaked figure, the Flute Player, appears in the Underground Aqueduct level of Castlevania Chronicles. Instead of asking the player if they want to buy an item, he'll magically rotate four of them above him. The player then only needs to jump and whip the item they want, and the Flute Player won't even charge them for it in any way. If none of the items offered is satisfactory, the player can whip the Flute Player instead, making him display four new items. This process can be repeated until the player sees something they may have interest in or when they whip the Flute Player for the eighth time, moment when he'll finally get fed up and go away, never to be seen again.

Because of the aforementioned trading mechanics of this individual, he shares many similarities with Vampire Killer's Old Crone, raising the question if they are related in any way. Further reinforcing this theory is that both characters will disappear once they've been struck exactly eight times. 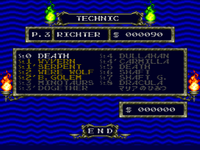 While there is no shop properly in Rondo of Blood, the player is presented with a "Technic" option in the main menu, where they can buy boss battle hint gameplay recreations with the gold they have collected throughout the game. These "videos" will become available for purchase only if the respective boss has already been fought in the main game.

Each hint recreates a gameplay session starting from the room prior to that of the boss' and without any kind of power-ups or extra Hearts, other than those collected in such room. The computer-controlled character will always be Richter, who is commonly considered to be more difficult to control than Maria, and a gameplay recreation will ensue, showing how to beat each boss without taking a single hit and with the basic supplies a player would have when using a new life. This is with the intention to demonstrate that all bosses are defeatable even with the most basic reserves.

The Master Librarian provides Alucard with several one-use items and pieces of equipment upon visiting him at his study, located in the Long Library. Visiting the Reverse Castle and attaining a high map completion rate unlocks new items in the shop. The Duplicator is the most expensive item sold ($500,000), which can be unlocked after defeating Dracula.

Renon is a demon salesman who will provide the player useful items to aid them in their adventures in exchange for gold. Care must be taken not getting too greedy with him, though. If the player has bought too many items throughout the course of the game and spent at least 30,000 gold pieces with Renon, he will turn into a hostile demon near the end of the adventure, and the player will have to confront him in a boss fight.

The shop in Harmony of Dissonance is unique in some aspects for a number of reasons. First and foremost, it's not immediately accessible to the player, as its location is initially hidden. The first shop in the game is found in a room of the Castle Treasury (Castle B) that has a peculiar layout and is only inhabited by the Gate Guarder. Pushing this enemy off the ledge will make it fall and roll toward the lower end of the room, destroying a boulder that was blocking the way. The Merchant can be found in the next room; he will present himself and offer Juste his wares for a price. Most items in his stock (and in the whole game for that matter) are either restorative potions or protective gear.

The Merchant will be moving his shop between several locations within the castle during Juste's journey, and sell different items in each one. There will be certain occasions where he will only appear if the player has satisfied certain conditions:

Hammer opens his shop in the Castle Corridor, only after meeting Soma for the first time. He sells more items and equipments once Headhunter is killed and even more after Death is killed. The Soul Eater Ring is the most expensive item sold ($300,000).

The shop is available at the very beginning of the game, with Rinaldo Gandolfi as its keeper. He sells usable items such as potions and tickets, as well as gems. The player can also sell items to him for gold. Additional items will be unlocked in his shop once the game has been beaten. The Magical Ticket will allow the player to teleport in front of his house.

Hammer once again serves as the shopkeeper in Soma's second game, and similar to the first, the items and weapons offered increase on map coverage. His shop can be found near the bottom-left part of the Lost Village, across the street from Yoko's study. This time he also sells UMA News, which only provide gameplay hints. New weapons forged through Yoko's Weapon Synthesis become available at the shop once discovered. Interestingly, Hammer and Soma have several dialogues each time the player interacts with him after defeating bosses or triggering crucial story points. Similar to the previous installment, the Soul Eater Ring is the most expensive item sold ($300,000).

Julia Laforeze sets up a shop for Hector at her house, located in Baljhet Mountains. Several consumables and basic weaponry can be purchased here. First of all, talking to Julia instantly replenishes Hector's HP and the currently summoned Innocent Devil's Hearts. Not only that, but she can also house those Innocent Devils which are not required by the player at the moment. She can also create new Innocent Devils from the Devil Shards dropped by these creatures through the process of devil forging. The Mobius Brooch is the most expensive item sold ($200,000), which is only available after beating the game on Crazy Mode.

Vincent Dorin opens the shop of this game at an early stage. He can be found in the Entrance's Save Point, beside the area where Wind stays.

The PSP remake of Castlevania: Rondo of Blood does not have a merchant. Instead, a Boss Demo "shop" can be accessed through the game's menu. Only the boss battle demos for defeated bosses are available for purchase here using the game's currency.

The shop system becomes available only after Shanoa rescues the second villager, Jacob. He only sells a very few number of items at the beginning, but new items are added to his shop each time Shanoa defeats a specific boss or completes a quest from one of the other villagers.

After freeing the him, the Chupacabras will open his shop near the exit of the City of the Damned.

Retrieved from "https://castlevania.fandom.com/wiki/Shop?oldid=282027"
Community content is available under CC-BY-SA unless otherwise noted.