Alec Newman
Simon Belmont (シモン・ベルモンド, Shimon Berumondo?, Simon Belmondo) is one of the protagonists of Castlevania: Lords of Shadow - Mirror of Fate. He is the son of Trevor and Sypha Belmont. Following the death of his parents, Simon decides to destroy the evil Dracula once and for all.

Born in 1067, Simon is the son of Trevor Belmont and Sypha Belmont. At the age of six, his parents were murdered by the forces of Dracula, Sypha to a pack of lycans and Trevor against Dracula in single combat. Simon was lucky to escape with his own life. Lost and alone, he was found in the forest by some of the mountain people, taken in and raised among them.

However, he never forgot what had happened to his parents and vowed to deliver vengeance one day upon those responsible. He trained hard and was extremely gifted in combat, yet life was hard for young Simon growing up. Always an outcast among the tribe, he developed a strong will and stubborn attitude that would always boil over into rage, and men soon came to fear him and his prowess in the arts of war. He fiercely protected a fragment of a magical mirror given to him by his father and always wore it around his neck for safekeeping.

Many years passed, yet the rage and yearning for revenge never left his heart. So one day he left the relative safety of the mountains and headed towards the land of his birth, to seek out the one they call the Dragon, to meet him face to face, and destroy him forever, little knowing that the curse of his family name would lead him into darkness and a terrible truth. 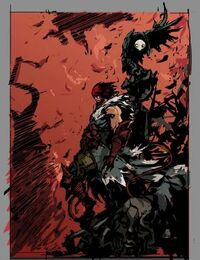 Upon arriving at the castle gates, Simon encounters the Lost Soul, who shows him that Trevor's Combat Cross is still in the castle. After going through the caves and finding his mother's spirit, he battles the Night Watchman in the castle hall, and leaves him for dead.

While using an elevator near the castle kitchens, Simon sees a mysterious figure in flames, dropping from a tower and diving into the water below. Simon is then incapacitated by Hunchbacks, but kills his foes easily when he regains consciousness. In a theater, Simon confronts a legion of |Puppets, and Alucard helps him escape before disappearing without saying a word.

In the library, Simon finds a secret place and his father's weapon. A Necromancer steals the weapon, saying Zobek is looking for it, and confronts Simon. The warrior emerges victorious and retrieves the weapon.

Simon is later trapped in the Toy Maker's carousel, but Alucard appears once again to help him, swearing that Simon will not fight Dracula alone. The Dark Lord watches from above, unnoticed by the two warriors.

After climbing a tower, Simon breaks into the castle keep, but finds a paradise created by the Succubus. While he doesn't at first resist her, her soul drain forces him to realize it's a trap, and he battles the Succubus. Upon her demise, her illusion fades and Dracula appears, sitting on his throne.

After a short dialogue, the two prepare to fight, but Alucard intervenes. The three engage in battle, but Simon and Alucard barely have the upper hand in the fight against the Dark Lord. Simon is knocked unconscious in mid battle and then controlled by Dracula for a short bit of time, but Alucard frees him from the mind control by draining the black fog surrounding his form.

Once the two finally defeat Dracula, the vampire disappears, and Alucard notices his death is atypical for a vampire. Simon reluctantly gives his mirror fragment to the Lost Soul on the request of Alucard, who explains he will never be able to make a decision with the cursed artifact. Simon asks Alucard of his true identity, but the vampire doesn't answer and takes his leave.

Simon is last seen in the mountains, watching the castle collapse and saying farewell to Alucard, who is seen flying out of the destruction in bat form.

After the events of Mirror of Fate

After the events at Dracula's castle, Simon marries a woman named Selena. The couple continues the Belmont line. After the destruction of the Brotherhood of Light in their final battle against Dracula, the surviving members seek out Simon's descendants to act as their new leaders. These descendants would command what remained of the brotherhood, preparing for Dracula's return.

In comparison with his father Trevor Belmont, Simon appears more barbaric. He wears leather gloves, a fur cloak, is bare-chested, has a thick beard and carries a leather whip, named the Beast Killer, rather than the Combat Cross which he later obtains. The reason for this difference is because Simon was raised by Mountain People, while Trevor was raised by the Brotherhood. In addition to his "barbaric" attire, Simon seems to be wearing a wooden face on his torso similar to one worn by Baba Yaga (but they don't have connection[1]). He wields a leather whip and uses some of the sub-weapons that he previously used in past games. Unlike in previous games, he is also able to call upon mystical guardians.

Simon is a gruff man given over to fits of anger, as evidenced when he almost smashed the mirror pendant when the Lost Soul failed to speak to him and refused to show him anything. His gruff and straightforward method of dealing with problems can be a concern at times, but otherwise does not impede his ability to rampage through Dracula's castle with abandon.

Unlike the usual stereotypical protagonist, Simon prefers not to concern himself with anything outside of his primary goal. This is the sole reason he neglected to finish off the Night Watchman after defeating him, leaving Alucard to deal with the Reaver he would later become. Another example of his straightforward personality is shown when he finds the relic holding the Spirit of Belnades; giving it a single glance he tosses it over his shoulder with a grunt of disinterest, unintentionally freeing the spirit in the process.

While his straightforward manner of dealing with problems, and his unrelenting iron focus on the matter of Dracula's defeat help him overcome most of the creatures in the castle, in truth, Simon proves to be no match for Dracula himself, something that is mentioned by Alucard and later by Dracula himself. In fact, only by teaming up with Alucard was Simon able to land the finishing blow to Dracula at all, as neither Belmont would have been able to defeat him otherwise. And even then it's implied that Dracula was holding back as he never makes use of his void or chaos power, and whenever he strangles Alucard with his whip, he never follows through and kills him as pressing the button to be free does nothing and not pressing it does nothing. It's entirely possible that Dracula was putting on a show for his son's and grandson's benefit the entire time.

Due to years of hunting and training in the mountains, Simon grew into a strong and capable warrior, able to tear weaker monsters apart with his bare hands and even pummel stronger beasts to death, such as when he overpowered the Night Watchmen, stealing his own weapon and beating him with it and the Necromancer, who he ripped apart. One evidence of Simon's great strength is the fact the he is able to snap Merman's necks and break Werewolves backs over his knee with relative ease.

Like his father and grandfather, Simon displays great combat prowess, first with his Beast Hunter whip and later with his father's Combat Cross, using both weapons with great skill. However, despite his skills in battle, his now vampiric father, upon seeing him fight, calls his human self as one of the greatest warriors the Brotherhood ever had and openly made it clear Trevor outclasses Simon and that the latter is no match for Dracula, which is proven when he and Alucard fought Dracula and although able to keep up with Alucard in battle, Dracula knocked out Simon repeatedly whereas Alucard was never incapacitated by Dracula even though Alucard alone cannot defeat Dracula. In the end, Simon needed Alucard to restrain Dracula so he can defeat him.

Simon has some magical abilities due his tie to the Belnades bloodline. Although Simon doesn't carry a magical medallion and isn't trained in Combat Focus he is still able to absorb magic into his body. Simon is able to manifest the Spirits of Belnades and Schneider from his body after he finds their spirits. Though the Spirits use magic and Simon is able to call on them for defensive and offensive aid, they draw on Simon's magical reserves simply to remain summoned and can be stolen from him as evidenced when the Necromancer ripped his mother's spirit from his body. He can also control energy and use it in blasts (Tremor Punch and Earthquake Punch).

Español Português do Brasil
Community content is available under CC-BY-SA unless otherwise noted.