Vampire Killer
Simon Belmont III is a character from Konami's Wai Wai series. This character is a reference to Simon Belmont from Castlevania. Although not named in the actual games, the name "Simon Belmont III" appeared as Simon's name in both Konami-Pub and Tokuma Shoten Wai Wai World guidebooks.

Konami Wai Wai World is a Konami mascot game released for the Famicom game system in 1988. It tells the story of Konami Man and Konami Lady, who are sent to different worlds by Dr. Cinnamon in order to rescue several heroes from other Konami games, and save Konami World from the evil Warudā.

One of the worlds they have to travel to is the world of Castlevania, where they must rescue Simon Belmont III. Once Simon is rescued, he becomes available as a playable character. Simon can use his whip, which has average power but the longest range of all normal attacks in the game, and make use of the Cross sub-weapon, which is the most powerful secondary weapon in the game.

His theme song is the famous Vampire Killer. 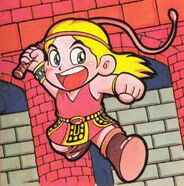 Retrieved from "https://castlevania.fandom.com/wiki/Simon_Belmont_III?oldid=288325"
Community content is available under CC-BY-SA unless otherwise noted.