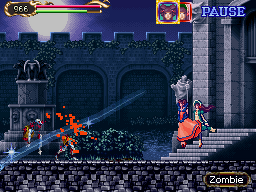 Sisters Mode is an alternate mode in Castlevania: Portrait of Ruin. In this mode, the player controls Eric Lecarde's twin daughters, Loretta and Stella. This mode is a prequel to the main storyline.

In this mode, the player controls Loretta and Stella on a mission to save their father from the hands of Brauner two years prior to the main storyline.[1]

The player can press the L button to switch between the sisters. The sisters can levitate, so all parts of the castle are accessible from the start. However, to end the game, all eight of the portraits used by Brauner inside the castle must be completed in order to enter his domain, where the final cutscene will be shown.

The sisters attack by using the touchscreen: Stella attacks by swiping the touchscreen, while Loretta attacks by using ice magic by tapping the touchscreen. These attacks consume MP as they are performed, so care must be taken, lest Stella and Loretta wind up without a method of attack in a hairy situation. Also, levitating drains MP, so be mindful of the sisters' MP bar when flying for extended periods of time. To compensate for this, not only do the sisters have a very quick MP regeneration rate, so long as they remain on the ground, but they also possess immunity to curses.

When Brauner's portrait is entered, instead of fighting him, they find Eric in the room, who has been severely wounded by Brauner in order to lure the sisters into a trap where he will vampirize them, setting the events of the main story. The game does not save when this happens; as a result, it is impossible to fight Dracula in this mode without a glitch.

In addition, once 888% map coverage has been uncovered, the player can gain access to the Nest of Evil, although this is not for the faint of heart, since all of the sister's attacks do only 1 damage to Gold Skeletons.