Skeleton Blades, also known as Skeleton Blaze or Blade Master, is an enemy in the Castlevania series. It is an elite skeleton warrior armed with two swords.

Skeleton Blades are skeletons armed with a blade on each hand. In some games there are two levels of skills of skeleton blades, the weaker one is a Blade Soldier (Blades Novice in Japan) and the more experienced one, called a Blade Master. The first one is oftentimes stationary, sometimes lunging a sword forward (although it has an energy blast in Castlevania: Order of Ecclesia, where it is called the Skeleton Hero in the North American version). The more experienced one often jumps around, slides and performs large swipes with the blades. Curse of Darkness also has a third type, called the Blaze Phantom.

First appearance of Skeleton Blades in the series. It is the first real threat encountered in the game, as he surprises the player by breaking out of one of the windows located on the second floor of Aljiba (Stage 1). His attacking patterns are much more advanced than those of the Skeleton Apes the player has encountered so far, and he reacts according to their movements, either by jumping away or slide-kicking when the player attacks.

While Skeleton Blazes may be defeated relatively easy, one must be wary of his advanced version: the Blaze Master. This enemy has the ability to block frequently when attacked, sometimes inhabiting very confined spaces. Attacking it continuously may not be advisable, as he will keep blocking most attacks and oftentimes find an opening to counterattack, connecting many hits in quick succession and dealing considerable damage. If the room's layout allows it, it is recommendable to just jump over them and continue onward.

Even when the Skeleton Blaze does not appear in Aria of Sorrow, his soul does. It can be obtained by destroying a soul-keeper located in a room of the Dance Hall, only accessible after defeating the Big Golem. This soul will grant Soma the ability to slide, allowing him to move through narrow spaces and reach new areas.

There are three types of "blaze" enemies in Curse of Darkness. Even when they are still mentioned to be skeletons, their bodies are portrayed to be very muscular and athletic. What makes them so important are the rare materials they can drop or be stolen from them. However, they are some of the most difficult enemies to steal from, usually needing to perfect guard a specific attack so they can open their stealing window for a split second, and then quickly trying to mug them. What makes things harder is the fact that most of the times they will be knocked away from Hector after he has successfully blocked the attack, sending them out of reach for stealing. To steal from them, it is recommended to take care of the whole group first and leave only one or two alive; keep blocking while trying to corner one against a wall, perfect guard his attack, and quickly attempt to steal.

The Blaze Master and the Blaze Phantom have the added ability to cover the floor with exploding knives,[1] effectively compromising the area where they are fought.

A concept art of an ambidextrous pirate-like skeleton from Castlevania: Resurrection, possibly a representation of a Skeleton Blades 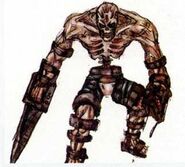 Retrieved from "https://castlevania.fandom.com/wiki/Skeleton_Blades?oldid=278079"
Community content is available under CC-BY-SA unless otherwise noted.