The human inhabitants of the Vampire Castle suffered a cruel fate once the Dark Lord set up her lair inside. While most of them changed into Vampire Warriors, a few, mainly those who were the Dark Lord's most loyal retainers when she was human, were made into Skeleton Warriors by the spell of the Puppeteer.

Unlike other beings animated by this magic, the vestiges of a once human soul make Skeleton Warriors difficult to command and they are therefore rarely found in groups greater than two or three.

Gabriel first encountered the Skeleton Warriors in the Sewers under the Vampire Castle. While he was attempting to open a gate, one of the skeletons inched closer and closer to him. Gabriel turned around just as it had gotten to his position. He encountered more throughout the castle.

Flaming Skeleton Warriors from the underworld appear in the DLC Resurrection.

In Lords of Shadow 2, the souls of the skeleton warriors are no longer under the control of the Toy Maker, the castle blood now has the power to bring Bloody Skeletons to life.

Revelations DLC adds Bloody Lancers, which are like normal Bloody Skeletons only stronger and with long lance weapons.

Skeleton warriors have medium speed, and are well armored. The best strategy is to keep a distance, and roll behind them to attack their backs. If hit from the front their helms and shields will break after a while making it easier for a frontal attack. Once in a while a warrior may turn into a whirlwind, and fly around the room. Roll to avoid this or run away from it. When the whirlwind stops the skeleton is stunned for a few moments, which is a good time to do extra damage. Once the skeleton is damaged enough it will collapse, and the crushed bones will begin to jitter and hop on the ground. Do a ground attack, such as a ground punch, or a guillotine strike to break the bones. Otherwise, the skeleton will arise for an encore fight. Bloody Skeletons and Lancers are harder because they breakdown into a blood puddle that can move. A good strategy is to freeze them: if they are damaged enough in a frozen state, the Bloody Skeletons will instantly shatter.

Finish the level after killing 3 Skeleton Warriors without destroying their shields.

Kill 3 Skeleton Warriors while mounted on a Warg.

Skeleton Warrior in Lords of Shadow 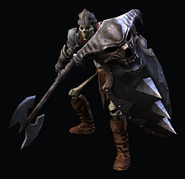 Armored Skeleton in Mirror of Fate

Bloody Skeleton in Lords of Shadow 2 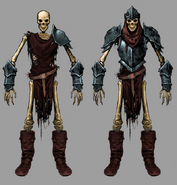 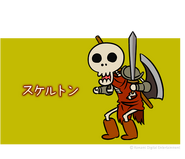 Add a photo to this gallery
Retrieved from "https://castlevania.fandom.com/wiki/Skeleton_Warrior_(Lords_of_Shadow)?oldid=283169"
Community content is available under CC-BY-SA unless otherwise noted.