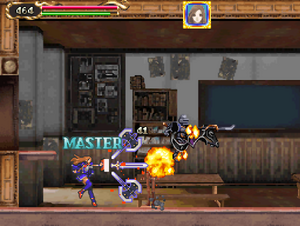 Not to be confused with Weapon Mastery.

Skill Points, commonly abbreviated as SP, are a statistic found in Castlevania: Portrait of Ruin. As it name implies, they affect how skillful Jonathan Morris becomes with a certain sub-weapon, acting similarly to how Experience affects in developing a character's stats.

Most enemies in the game will grant a determined amount of SP when defeated, which will then accumulate on a certain sub-weapon's count toward mastering it. The total amount of SP necessary to "MASTER" a sub-weapon can be consulted in the PAUSE menu, GUIDES > SKILLS. If the player is able to satisfy the required amount of Skill Points for a sub-weapon, they'll be granted with a more powerful version of that sub-weapon, along with additional effects or even a new appearance. Note that the sub-weapons gradually increase in damage for every 30~50 SP gained, depending on the maximum mastery. Mastered sub-weapons are also colored yellow in the inventory.

Note that the SP obtained for a kill will only add to the skill mastery count of the last sub-weapon that hit the enemy. For instance, if the player attacked the Werewolf with the Javelin at the start of the fight and then continued the battle by throwing vials of Holy Water at it until it was defeated, the 60 SP gained for defeating it will only be added to the Holy Water skill mastery count and not to the Javelin's.

Most bosses will provide large amounts of SP; the player must only hit them once with the preferred sub-weapon and then concentrate in attacking them by normal means. However, some bosses (most notably, characters in the storyline) won't yield any Skill Points or Experience at all (Stella, Loretta, Whip's Memory, Brauner, Death and Dracula).

Two of Wind's quests require mastering certain sub-weapons in order to be completed:

Retrieved from "https://castlevania.fandom.com/wiki/Skill_Points?oldid=264794"
Community content is available under CC-BY-SA unless otherwise noted.