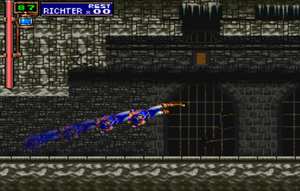 Richter Belmont's Slide Jump (known as a Drop Kick in Japan) move is similar to a Slide move, except that he lifts himself off of the ground part way through the slide. It can be performed by pressing the JUMP button (again) shortly after starting a slide. This can be used to get through narrow corridors with raised platforms in them which would otherwise be impossible to slide through. After sliding through an enemy, he may flip around to face the other direction. This move was first available to him in Castlevania: Symphony of the Night.

Retrieved from "https://castlevania.fandom.com/wiki/Slide_Jump?oldid=259711"
Community content is available under CC-BY-SA unless otherwise noted.