"Attacks his father, Christopher, because of the evil magic. Having the same whip attack as Christopher, and uses 3 daggers as weapons."
— Japanese Belmont's Revenge instruction booklet description.

Soleil Belmont (ソレイユ・ベルモンド, Soreiyu Berumondo?, lit. "Soleil Belmondo"), also known as Soleiyu Belmont,[3] is a major antagonist in Castlevania II: Belmont's Revenge. He is the son of Christopher Belmont, the protagonist of the previous game, Castlevania: The Adventure.

Soleil learned all the skills to become a vampire hunter from his father. However, once he reached adulthood, he turned against him due to being under the evil influence of Count Dracula.

In 1591, fifteen years after Christopher Belmont defeats Dracula, a ceremony was held in the town of Transylvania. The son of Christopher Belmont, Soleiyu Belmont, had come of age, and it was time for the title of vampire hunter to be passed down to him.

But on the morning after the ceremony, it was discovered that Soleiyu Belmont had vanished into thin air. The ceremony was the chance Dracula had waited for. Soleiyu received great sacred power in the ceremony to mark his adulthood, and Dracula used his last bit of magic to turn Soleiyu's powers against him, transforming him into a terrible demon. Then, aided by Soleiyu-demon, Dracula was able to assume human form once again. That evening, to the northeast of the village, the earth shook with a thunderous roar and four ominous castles appeared.

Soleil starts the battle by hurling three spinning swords high on the room, which after a moment launch themselves individually directly at the player. Meanwhile, he will advance forward and start striking incessantly with his whip when in close proximity to the player. He may or may not jump on the platforms that are present in his room, making his fight a bit unpredictable and potentially making it difficult to plan effective evading maneuvers ahead.

The following are the dialogues that are played when encountering Soleil in the castle. These are different between the original Game Boy version of Belmont's Revenge and the one included in the Konami GB Collection series. Note that those are the only dialogues in the game. 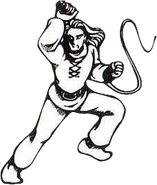 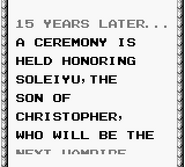 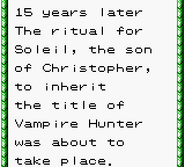 Retrieved from "https://castlevania.fandom.com/wiki/Soleil_Belmont?oldid=294934"
Community content is available under CC-BY-SA unless otherwise noted.