Christopher's son appears at the beginning of the novel as a young boy who is captured by Dracula and turned into a vampire by him. However, this scene occurs in a dream Christopher has the night of his wedding.

At the end of the novel, and while still in his mother's womb, Dracula's just defeated spirit enters his body, where he awaits his coming of age to take control.

Christopher looks at his yet unborn son in a nightmare. 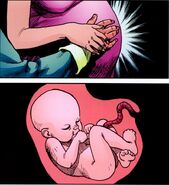 So he is!
Add a photo to this gallery

Retrieved from "https://castlevania.fandom.com/wiki/Son_of_Christopher?oldid=274370"
Community content is available under CC-BY-SA unless otherwise noted.