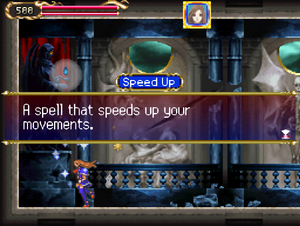 The Sonic Dash spell allows the protagonist to speed up walking in exchange for MP. It creates an energy shockwave around the character, dealing minimum damage. However, if the player has leveled up enough, the shockwave will be able to defeat stronger enemies in a single hit. MP consumption is usually very low and can be discarded as an impediment to keep the spell activated.

Because the shockwave will also destroy objects and furniture, that means that every time the protagonist touches a candle (or its variants), he or she will instantly pick up its contents, which most commonly will be hearts (the MP bar won't be at 100% because the Sonic Dash will consume some of it, thus making hearts appear constantly), keeping the spell sustained and allowing the MP bar to be almost full all the time.

In Circle of the Moon, the DSS combination Jupiter + Griffin provides Nathan a Sonic Wave shield while running.

In Aria of Sorrow, Soma will find the Black Panther soul (which provides the Sonic Dash ability) contained inside a candelabra in the next room after defeating Graham Jones, if he equipped the three required souls (Flame Demon, Giant Bat and Succubus) while dealing the last hit on his first form, thus avoiding the bad ending.

Using Sonic Dash in water without equipping Skula soul will disable its shockwave while maintaining its speed boost. Changing its direction on ground also can disable its shockwave for a short period, so it's advisable to change the direction while jumping if necessary. Since it has 1 hit/second rate, it's impossible to damage an enemy twice during a single dash.

In Dawn of Sorrow, the Black Panther soul must be stolen from an actual black panther. These can be found in the Abyss.

Speed Up is one of Charlotte Aulin's magic spell skills in Portrait of Ruin. When cast, it speeds up the player's movements for an extended period of time. Once the effect passes, the spell must be cast again.

Charlotte can cast both a half and a full charge version of this. A fully charged spell enhances her speed about half faster as the regular version and the shock wave deals double damage.

Rapidus Fio is a back glyph that creates a mystical shock wave around Shanoa, allowing her to move rapidly and damage enemies on contact. It roughly doubles her movement speed.

Jupiter + Griffin from Circle of the Moon.

Speed Up from Portrait of Ruin.

Rapidus Fio from Order of Ecclesia.

Dodge from Judgment.
Community content is available under CC-BY-SA unless otherwise noted.