He is well-known for his complicated, energetic synth/trance songs; his earlier beatmania IIDX songs often featuring the robotic vocals of cyborg AKEMI, or other robotic-sounding vocals.

Sota is also a regular composer for pop'n music since pop'n music 13, jubeat since jubeat ripples, GuitarFreaks & DrumMania since GuitarFreaksXG & DrumManiaXG, and Reflec Beat since its beginning. He also still contributes occasionally to the DanceDanceRevolution series, although currently only for arcade games. He also did all the background music for the Sound Voltex series, jubeat saucer fulfill and Reflec Beat groovin'!! 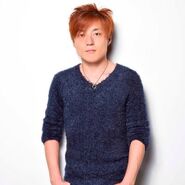 Retrieved from "https://castlevania.fandom.com/wiki/Sota_Fujimori?oldid=260380"
Community content is available under CC-BY-SA unless otherwise noted.