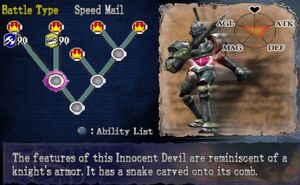 "Features of this Innocent Devil are reminiscent of a knight's armor. It has a snake carved onto its comb."
— Description

Speed Mail is a Battle-Type Innocent Devil found in Castlevania: Curse of Darkness. It's a Level 2 Innocent Devil and can learn Heavenly Sword. It can be obtained from a Magmard Devil by collecting Blue, Green or White Evo Crystals.

The Speed Mail evolution boasts the highest AGL growth rate for the Battle-Type Innocent Devil, coupled with a decent ATK growth rate. This makes it the most viable Battle-Type to level-up should the player wish to have a Battle-Type capable of inflicting high damage-per-second. The trade-off is that it also has a the lowest Heart growth rate, meaning it could easily die in the middle of a fight, or be unable to cast much of its abilities. It can evolve into a Rasetz or a Corpsey. Being armed with a sword, Speed Mail and its said evolutions have a greater attack range compared to the "Bruiser" evolutions of the Battle-Type.

Retrieved from "https://castlevania.fandom.com/wiki/Speed_Mail?oldid=179171"
Community content is available under CC-BY-SA unless otherwise noted.