Spirits of Halloween Past, Present and Future

The Spirits of Halloween, or Parent and Child Sorcerer (まどーしさん親子, Madōshi-san Oyako?) in the Japanese version, are a couple (or trio, depending on the version of the game) of bosses that appear in both Kid Dracula and Kid Dracula (GB). They are the bosses of the first stage in both versions of the game.

A trio of ghosts that guard the Castle Keep. They attack one at a time, from youngest to oldest.

The first to attack is the Child Ghost, who slowly jumps around across the screen in an attempt to inflict physical damage and eventually stops to spew fireballs from the edge of the screen. Once beaten, he will run crying to his daddy.

Next is the Parent Ghost, who is much larger and also starts his attack by jumping around the screen. His other attacks consist in standing on one side of the room and spewing three fireballs in succession, and running back and forth across the screen in an attempt to bump on the player. In Kid Dracula (GB), the father also cries to his own father when he's beaten.

Last but not least is the Grandparent Ghost, who is completely impervious to damage, although he happens to not be very effective in battle, as he just walks forth and back across the room once and then collapses from exhaustion, at which point the Child Ghost discretely drags him away to avoid any further embarrassment.

In the Famicom/NES version of Kid Dracula, the Child Ghost reappears as one of the three contestants at the end of the New York stage during Lady Liberty's quiz contest.

Parent and Child Ghosts from the Boku Dracula-kun instruction booklet.

Spirits of Halloween Past, Present and Future from the Kid Dracula (GB) instruction booklet. 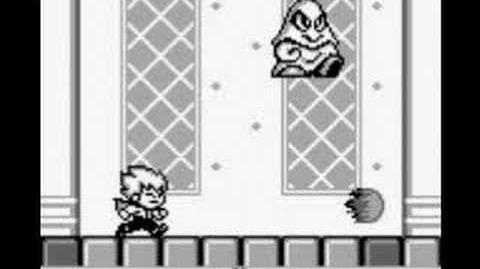