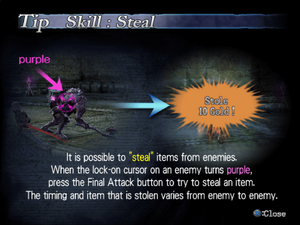 Steal is a skill Hector possesses in Castlevania: Curse of Darkness. It allows him to steal gold, materials and items (sometimes unique) from enemies and bosses.

Stealing requires the player to lock-on an enemy and wait until the cursor turns purple. When this happens, Hector may then attempt to steal from the enemy by pressing the Final Attack button (

). The window of action can be very short (sometimes less than one second), so the player should be ready to steal as soon as possible (Death being the best example and the most difficult enemy to steal from in the entire game). In some cases, Hector will have to perform a specific action in order for an enemy to open its window for stealing. Some examples include:

Most of the time, stealing will cancel the enemy's action. For instance, stealing from a Skeleton while it attacks, will stop the attack.

Retrieved from "https://castlevania.fandom.com/wiki/Steal?oldid=279853"
Community content is available under CC-BY-SA unless otherwise noted.