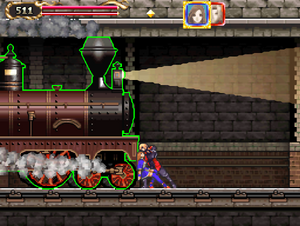 The Strength Glove is a relic found in Castlevania: Portrait of Ruin. It grants the ability to increase a character's pushing power, thus allowing him or her to move certain walls and slabs scattered within the castle and open access to new areas. These walls are easily recognizable, as they have a green glowing outline around them. Once this relic has been obtained, the player only has to walk into one of these walls to start pushing it. If the player then summons the aid of the other character, both of them will push together to move the wall faster. This relic can be obtained in the third room after fighting Astarte at Sandy Grave, along with a conveniently placed pushable block nearby.

As mentioned above, there are a few movable blocks within the castle, but perhaps the most important one is located on the eastern wing of the Great Stairway, where a movable wall with a strange retractable mechanism can be found. This device will place the wall back to its original position if it's not pushed with enough strength. Both Jonathan and Charlotte must help in pushing this wall all the way to the right. If they succeed, a safety device will hold the wall in place, allowing them access to the Tower of Death, where they may opt to fight Stella Lecarde. Successfully defeating her will open a new set of dialogues with Wind, unlock new quests, and add new inventory to Vincent's shop (including the Castle Map 3, Viking Helmet and Glass Shoes, among others).

Another prominent use of this relic takes place at the beginning of 13th Street, where both characters are needed to try to stop an upcoming train locomotive by pushing together. However, having both characters already out on the screen when the train approaches will always result in failure to stop it. The second character must be called immediately after the first one makes contact with the train. If they succeed, they'll be able to proceed further into the level.

The strange contraption in the Great Stairway

Jonathan and Charlotte attempting to stop a locomotive in 13th Street
Add a photo to this gallery
Retrieved from "https://castlevania.fandom.com/wiki/Strength_Glove?oldid=183980"
Community content is available under CC-BY-SA unless otherwise noted.