"Your idea was the equivalent of the village idiot walking in here and saying, "I think we should be able to light fires by punching a fish." It basically made no sense and Morana made it work anyway."
— Striga criticizing Carmilla's plan in "Abandon All Hope"

Striga (ストリーガ, Sutorīga?) is a character in the Castlevania animated series. She is one of the four Queens of Styria and a member of the Council of Sisters, serving as the leader of the army of vampires.

She was voiced by Ivana Milicevic in the English version of the show.

Striga is the commander of the Styrian army and a member of the Council of Sisters which rules the country.

Her past is obscure. Striga mentioned once in conversation with Morana, how hard it was to get to their current position, and that she "can't shake the past", likely meaning something that troubles her until the present day.

Striga is a female vampire with androgynous features. She has long black unkempt hair, dark gray lips, and light green eyes. Compared to the other members of Carmilla's Council, Striga is not only more stocky and muscular, but is also considerably taller than her peers. She wears a dark blue cloak which hides her black suit of armor, a red sash, a dress in a darker shade of white, and a leather belt. It should be noted that the left pauldron of her armor appears to be fashioned after a raven or crow's head. Striga also wears an ornament in her hair that is based on the original Carmilla's mask (which first appeared in Castlevania II: Simon's Quest).

Striga is the high general of Styria and its greatest warrior. She tends to be blunt, preferring honest "honorable" tactics. Lenore notes that while most of the sisters play with their prey, Striga would kill it and move on. Striga is not afraid to share her honest advice with Carmilla.

Striga works closely with Morana, the two keep the kingdom of Styria running. They have long been lovers and work exceptionally well together - combining solid plans, supporting each other, and pushing each other to greater heights. Striga is pleased with her life but remembers the hard road that leads to being a queen of Styria. Morana helps Striga look past this and inspires her with the notion that she can soon lead the full military might of an empire. Striga is committed to making that dream and Carmilla's vision come true.

Also, due to her warrior mentality, Striga possesses a very strong sense of honor and a strict code of conduct, as seen during her conversation with Morana, where she expressed surprise that any warrior would willingly turn on their employers and benefactors if offered more coin, than their initial offer by Morana to side with them instead, and later stating that "there was no honor in it".

Striga has also shown to be a military tactic genius, as seen where after only a day of hearing about Carmilla's new plan to build their own empire for themselves by taking advantage of the chaos of Dracula's rampage, Striga had already figured out and thought of several highly effective military tactics, techniques and plans to properly police, defend and maintain the national border defenses of their new territories. She also managed to easily see the pitfalls to the plan thought up by Carmilla and accurately came to the conclusion that the sole thing that they were missing to make it work was that they severely lacked the numbers for their armies to create a suitable invasion and security forces to police their new lands. She was also able to see the other pitfall of utilizing Hector's abilities as a Devil Forgemaster, as due to his ability to transform human corpses into night creatures, they would need a gigantic amount of fresh dead bodies to rebuild and expand their armies and that acquiring such a gigantic number would possibly backfire to them and damage their food supply.

It was also shown that similar to Carmilla, Striga has little to no respect for humans and possesses no pity or empathy for them. This is seen during her first meeting with Hector, where she dehumanized him by referring to him as an "it" and had little to no hesitation in agreeing to Carmilla's orders to keep him imprisoned in subhuman conditions in their dungeons. Later, Striga showed little to no hesitation in agreeing with Carmilla's plot to create their "corridor nation" of an "eternal food" supply and had already come up with several plans to imprison and herd the human population into concentration camps, further emphasizing the fact that she cares very little for humanity and only sees them as food.

"If her scheme is going to work, we need to move fast, before the humans regain control over the region in question."
— Striga in "What the Night Brings"

Genius military strategist: In all matters military, Striga is an expert. She understands all military aspects of what is required to take and hold eight hundred miles of territory. Regarding the use of Hector as Styria's forgemaster, Striga routinely provides sound insight on the potential pitfalls of letting Hector develop military forces.

– Striga: Soldiers, mercenaries, local forces — what's the difference?
– Morana: The difference is that mercenaries can be rehired by the opposing side for more money!
– Striga: But... there's no honor in that.
— ("What the Night Brings")

– Carmilla: Brilliant isn't it?
– Striga: It's lunatic. Do you know what annoys me about it the most?
– Carmilla: (takes a sip of her glass) What?
– Striga: It's a really good idea
– Carmilla (laughs)
– Striga: The moment is perfect. Your experience and all our intelligence tell us it's chaos from here to Danube.
— ("The Reparation of My Heart")

– Striga: They know what we are. And apparently they're not stupid. I need to get to my trunk.
– Morana: You never open that. What's in it?
– Striga: Day armor. Get in the trunk
– Morana: No.
– Striga: Arrows can't pierce and light can't get in. Get in the damn trunk, love.
— ("Walk Away")

Striga and Lenore in "Bless Your Dead Little Hearts".

Striga and Morana in "I Have a Scheme".

Striga and Carmilla on the castle gallery in "The Good Dream".

Striga redrawing her plans in "What the Night Brings".

Morana and Striga in the Season 4 trailer.

Striga in her day armor.

Striga in her day armor in Season 4 (first look image). 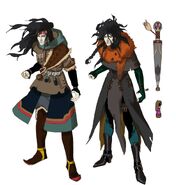 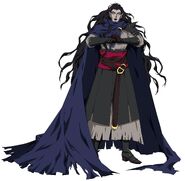