"You must despise humans. They are to be your prey.
Better for them to die than to let them compound their sins."
— Succubus to Alucard in Symphony of the Night

The Succubus is a recurring enemy character in the Castlevania series. Succubi are characterized by their ability to seduce their victims, followed by them consuming their life force. A succubus is a lower class demoness, the exact opposite of the high class vampire.[1]

The first succubus in the series appeared in Castlevania: Symphony of the Night.

A succubus or incubus is a demon from European folklore during the medieval ages, which takes the form of an attractive woman or man to seduce the opposite sex. They draw energy from men or women to sustain themselves, often until the point of exhaustion or death of the victim.

Although the terms succubus and incubus have their roots in Latin, entities with the same characteristics have appeared in the Sumerian King list from 2400 B.C., where the father of the hero Gilgamesh is identified as Lilu, said to be a demon who disturbs and seduces women in their sleep; one of four types of demons to which "the dark maid Lilith" gave birth to.

Succubi and incubi are often said to appear to men or women in their dreams, although other versions state that they actually sit on the chests of their victims while they sleep. The feeling of pressure on the chest, as well as other sensations, such as hearing voices or having hallucinations, has caused the Succubus and Incubus myth to be linked to sleep paralysis.

Succubi or Incubi take on the appearance of very attractive men or women. They possess the ability to create illusions –ranging from taking the appearance of loved ones, to creating illusory dream worlds or sensations– to soothe their victims, lulling them into a false sense of security.[2][3][4] The powers of a Succubus or Incubus reside in its claws.[4] When these claws are damaged or destroyed, it is rendered powerless.[4]

The Succubus disguises herself as Alucard's mother, Lisa, in order to deceive him. Throughout the castle, Alucard is able to rest in coffins in order to restore his health and save the game. One of these save points, located in the Underground Caverns, is different from the rest (colored in purple). If Alucard rests in that particular coffin, the Succubus appears in a nightmare and recreates the moment of Lisa's execution, taking her appearance. The scene ends with Alucard seeing through the illusion and resulting in an encounter between him and the Succubus. Due to her death in the dream world, her soul is sent wandering for eternity.

She has three main attacks:

Rica Fukami is the voice actress for the Succubus in the Japanese version. Barbara Whitlow voices her in the original English dub, while Jessica Straus does the voice in Castlevania: The Dracula X Chronicles version of the game.

If she defeats Alucard in The Dracula X Chronicles, she will say: "Come wander the darkness with me, love."

She has 666 HP, referencing the number of the beast.

The Succubus is a boss exclusive to Alucard. If Richter visits the room that normally houses the false save point, it will be empty, save for a single Heart that appears upon entrance to the room and floats to the floor.

Unlike her Symphony of the Night counterpart, in Circle of the Moon the Succubus doesn't take a prominent character role and instead appears only as a lesser enemy. She is one of the many lady bats that appear in the game, and her sprite is actually the basis for the rest of these types of enemies. Not for this should she be underestimated, though, as she boasts great mobility and flies all about the screen, running circles around Nathan and occasionally stopping in midair to shoot three simultaneous rays at different angles.

She drops the valuable Intelligence Ring, which greatly boosts INT (+50) while giving minor penalties to other stats. If the player manages to obtain two of these rings, rest assured they'll become able to perform some of the most devastating DSS attacks (such as summoning monsters) often without having to worry much about running out of MP.

Three stronger Succubi are encountered later in a room of the Battle Arena, attacking alongside three equally stronger Arachnes.

The Succubus is a palette swap of Lilith. Succubi encountered on either the Top Floor or the Chaotic Realm take the form of Mina Hakuba in order to deceive Soma. They lie on the floor as if injured and call out to him pleading for help, only to shed their disguise if approached or attacked.

The Succubus's soul is named Death Touch. It's an Enchanted Soul that gives the ability to absorb HP with every hit. This is similar to Alucard's Soul Steal ability from Symphony of the Night. It's also one of the three souls required to reach the true ending. It effectively turns the equipped weapon into a slightly weaker Mourneblade, healing 5 HP instead of 8, and has the same ability to heal when striking breakable objects, invincible enemies, and enemies which guard the actual hit, such as the Dead Crusader or the Great Armor.

It's worth mentioning the existence of a particular room in The Arena where a Succubus, accompanied by a Lilith, can be found apparently taking a bath together in a bathtub (complete with a floating rubber duck toy).

The Succubus is one of the five guardian monsters who maintain the seal placed on the entrance to the Pagoda of the Misty Moon. Her assigned area is the Ghostly Theatre. After Leon rings the Curtain Time Bell three times, the Succubus appears on the stage disguised as his lover, Sara Trantoul. Leon quickly sees through the illusion, however, and the Succubus reveals her true form.

After she's defeated, the Succubus reveals that Rinaldo had a daughter and implies that she had earlier adopted her guise in order to make him lower his guard.

The Succubus returns in Aria's sequel, Dawn of Sorrow. She can be found in The Pinnacle, the Cursed Clock Tower, the Demon Guest House and The Abyss. This time around, she disguises as Yoko Belnades to delude Soma and kicks him whenever he approaches her. Only by attacking Yoko's form will the Succubus reveal her true form. Her soul, Blood Sucker, is now a Bullet Soul that grants Soma the ability to drink an enemy's blood to replenish health.

The Succubus from Castlevania: Portrait of Ruin looks and behaves exactly like her counterpart from Dawn of Sorrow. She can be encountered in the Master's Keep and the Burnt Paradise. Due to the two playable characters, Jonathan and Charlotte, being able to switch around at will, the Succubus will say different things when encountered. In the case of Jonathan, she'll say: "I'll play with you.", and when playing as Charlotte, she'll exclaim: "Filthy cow!".

The Succubus makes her playable debut in the Arcade Mode of Castlevania Puzzle: Encore of the Night.

The Succubus appears in Chapter 2: Lord of Unseen Strings, and in Chapter 6: Come, Sweet Hour of Death. Her behavior and appearance is the same as from her previous two incarnations in Dawn of Sorrow and Portrait of Ruin. She once again disguises herself as Yoko Belnades. 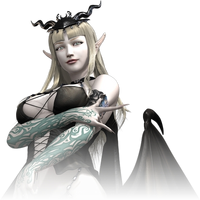 The Succubus is a recurring boss in the Pachislot Akumajō Dracula trilogy.

In the second game, she summons duplicates of herself to hold Trevor down while she steals a kiss and drains his energy. She then unleashes an electrical attack.

She is not shown being destroyed at the end in either game, and instead just pouts in submission. Her design is largely based on the one from Lament of Innocence.

"The supernatural seductress of the classic video game comes to life!"
— Official description.

NECA produced a seven inch tall action figure of the Succubus in their series of Castlevania figures. The figure was released on October 10th, 2007.

The appearance of the Succubus appears to be modeled after her Symphony of the Night appearance. The figure also came bundled with an Axe accessory and a figure of the Flea Man enemy.