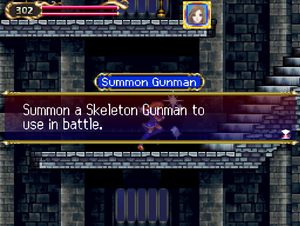 Summon Gunman is a spell that summons Skeleton Gunmen to use in battle.

It is one of Charlotte Aulin's magic spell skills in Castlevania: Portrait of Ruin. This spell summons two Skeleton Gunmen when uncharged and four when charged. The gunmen fire once apiece straight at enemies.

In Harmony of Despair, Charlotte can absorb and cast this spell. Initially, she starts off with one gunman which fires in a straight line. As she absorbs more iterations of this spell, more gunmen will appear. The maximum number of gunmen the player can have is three.

Summon Gunman from Portrait of Ruin

Summon Gunman from Harmony of Despair

Mastered Summon Gunman from Harmony of Despair
Add a photo to this gallery
Retrieved from "https://castlevania.fandom.com/wiki/Summon_Gunman?oldid=293781"
Community content is available under CC-BY-SA unless otherwise noted.