Not to be confused with Medusa Familiar. 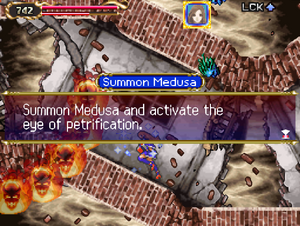 The Summon Medusa spell will summon a Medusa Head to aid the protagonist. She will usually shoot beams out of her eyes, possibly petrifying any enemy who gets hit.

In Symphony of the Night, this spell can be performed by using the Medusa Shield's combo spell with the Shield Rod or the Mablung Sword. It costs 30 MP to cast. A medusa head will spawn behind Alucard and shoot two beams with very slight homing capabilities. This beam only deals damage and does not petrify.

Summon Medusa is one of Charlotte Aulin's magic spell skills in Portrait of Ruin. The beams fired by the summoned entity, known as the "eye of petrification", will petrify their targets.

Interestingly enough, the head summoned appears to be that of Medusa herself and not a simple Medusa Head, which are in turn born from Medusa's hair.

Retrieved from "https://castlevania.fandom.com/wiki/Summon_Medusa?oldid=293765"
Community content is available under CC-BY-SA unless otherwise noted.