On August 8, 2018, it was announced via a Nintendo Direct stream that Simon Belmont and Richter Belmont, two iconic characters from Konami's popular Castlevania franchise, would appear as playable characters, with Richter being an "Echo Fighter" of Simon, meaning both have the same moveset.

Other renowned characters from the Castlevania series also appear in this game, including Alucard as an "Assist Trophy", the Mummy, Medusa, The Creature and Flea Man (Igor), the Werewolf, Carmilla, Death, Kid Dracula, and of course, Dracula himself. A Castlevania stage called "Dracula's Castle" was also introduced and is themed after the final stage of the original NES Castlevania, featuring the Clock Tower and Dracula's room. The game features 34 music tracks from across the series.

Due to the inclusion of all the above, Castlevania is the third-party series to feature the most content in any Smash Bros. game to date and the first one to present an Echo Fighter.

Super Smash Bros. is a fighting game starring characters from various video games (primarily Nintendo's own stable of games, although later games in the series have brought in guest fighters from other companies such as Konami, Capcom and Sega). In normal gameplay, two to eight players square off on stages usually consisting of several platforms.

The goal of the match is to knock the opposing fighters off the stage through the use of the character's own weapons and abilities or with weapons and items that appear randomly across the battlefield, such as swords, food, ray guns, bombs, hammers and Pokeballs. As fighters are hit, their damage level increases, causing them to be knocked away farther when hit by powerful weapons and/or "Smash Attacks" until they cannot recover to the edge of the stage, or are simply launched right off.

Each Belmont will come armed with the legendary Vampire Killer whip, which is a slow albeit longer weapon than any other that the rest of the fighters will wield in this game. They also use well-known sub-weapons such as the Axe (Neutral Special), Cross (Side Special) and Holy Water (Down Special), as well as some of Richter's characteristic moves such as the Uppercut (Up Special), Slide, Slide Jump and Tackle (Dash attack) for both characters. The Belmonts' "Final Smash" is the Grand Cross, which traps foes in a coffin before blasting them with said attack.

The main difference between Simon and Richter comes from the Holy Water attack. Simon's attack is fire-based, while Richter's is Aura-based (much like Lucario's attacks).

Simon and Richter are unlockable characters and must be defeated by the player before they become playable. They can be unlocked by different means:

Each character has a special route in Classic Mode, featuring 6 battles against enemies, a special mini-game, and a final confrontation with a boss. Simon's route is called Smash-vania and features battle against monstrous and/or dark characters, mimicking a Castlevania adventure. Richter's, Smash Echoes, pits him against all Echo Characters from the game (himself being an Echo Fighter). Both routes end with a race minigame and a final duel with Dracula.

The routes are as follow for Simon and Richter:

Death's Scythe appears in the game as an attacking item, with the ability to outright kill a fighter whose damage level is high enough.

Alucard appears as an "Assist Trophy", a secondary character who, when summoned by the titular item, will fight on the player's behalf for a short period of time. Alucard uses the Crissaegrim to hit opponents at short range, transforms into a bat to reach foes at long distance, and can dodge attacks by using Mist Form. Like other Assist characters, he can be attacked and KO'ed by opponents, but he is quite challenging.

The "Castlevania" stage is called "Dracula's Castle". It is a revamped version of Dracula's Castle from its original Castlevania incarnation. Popular to the series, sticks will appear on the stage which can be broken in order to obtain useful items.

Classic bosses from the franchise also appear based on the two games both Belmonts originally come from: Castlevania and Castlevania: Rondo of Blood. As such, Medusa appears in her floating bust form as seen in her introductory appearance in the first game, and The Creature once again tags along with the Flea Man (Igor, who had not appeared in any game since his introduction back in 1986). A Mummy and a Werewolf also known to appear, as well as Carmilla in her floating mask incarnation from the same game (which in turn is based on her first appearance in Simon's Quest). Death also makes an appearance, as well as the shadows of Dracula and Kid Dracula. All enemies are only acting as cosmetics and do no attack players.

A larger and flat version of this stage appears when players confront Dracula.

Dracula appears twice in the game: as the zone boss of Dracula's Castle in the Adventure Mode World of Light (Map 2) and as a boss in Classic Mode for Simon, Richter, Pac-Man, Luigi, and Sephiroth. All encounters opens with a short cutscene of Dracula tossing aside a wine glass before standing up and teleporting onto the stage, similar to his battle with Richter in Symphony of the Night. Dracula can only be hurt in the head: attacks below this area do not harm him and cause a misty effect.

He fights in a similar way to his traditional appearances:

When defeated, Dracula refills his health bar and transforms into his second form. Contrary to other bosses, no health item is given to the player at the beginning of phase 2. In this second part, Dracula attacks include:

Once his health bar is depleted, Dracula explodes and the player is awarded points (Classic mode) or rewards (Adventure Mode; including the two Dracula spirits). Sephiroth encounters Dracula as a normal boss (4th encounter) and then proceeds on to fight Ganon.

Spirits are divided into two categories:

Spirits are also divided into four types, which have strengths and weaknesses:

Finally, Spirits also are classified by rank, which symbolizes their basic power:

The trailer starts with a castle shown in the rain. A hooded figure advances under the rain before opening the doors to a dark corridor. Someone is heard screaming deeper into the castle: it is Luigi who is fighting Mummies. After his equipment proves to be ineffective, Luigi runs away in a room featuring a statue. As Luigi thinks he's safe, the statue animates and reveals to be Medusa, who scares Luigi away. As he runs, Luigi trips and falls face to face with Death, who takes a direct hit to his skull from a chain whip. The holder is the hooded figure who reveals to be Simon Belmont. Simon throws a Cross to Death before the trailer switches to gameplay footage.

Later, Simon is seen fighting Dracula and taking a hit from a flame pillar. As Simon is seen in a bad position on the ground, with a giant fireball coming right at him, another chain whip destroys the fireball. It is revealed Richter Belmont is the one protecting Simon, stating: "Begone! You don't belong in this world, monster!" before the trailer switches to gameplay again.

The trailer ends with Luigi being frightened one last time when Carmilla suddenly appears laughing on a nearby window. The scene then zooms out, giving a full panoramic view of the castle, while Luigi's scream can be heard. 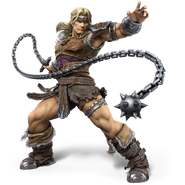 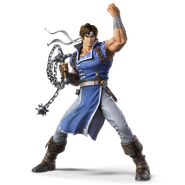 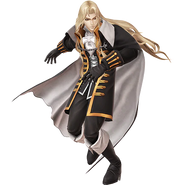 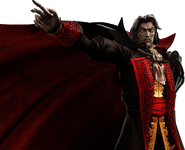 Dracula's second form render.
Add a photo to this gallery

Alucard as an "Assist Trophy".

Alucard as an "Assist Trophy".

Simon Belmont with the Axe sub-weapon.

Simon Belmont with the Cross sub-weapon. 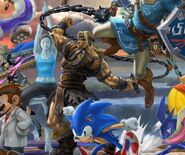 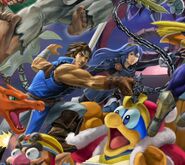 Richter appearing on the panoramic promotional art.
Add a photo to this gallery

Dracula's intro as a boss.

The Creature and Flea Man (Igor)

Dracula's Castle dungeon render as seen on the "World of Light" mode.
Add a photo to this gallery

Simon appearing with his hood.

Medusa reveals herself to Luigi.

Dracula's Castle
Add a photo to this gallery

Castlevania symbol in Super Smash Bros. Ultimate.
Add a photo to this gallery 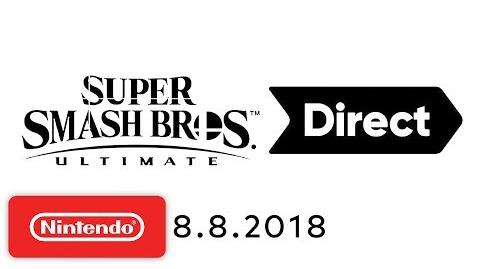 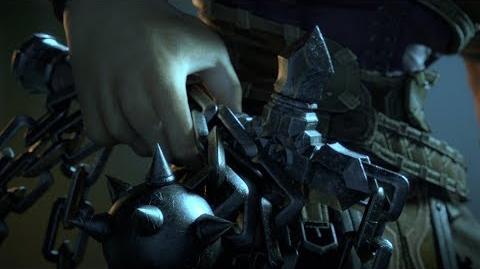 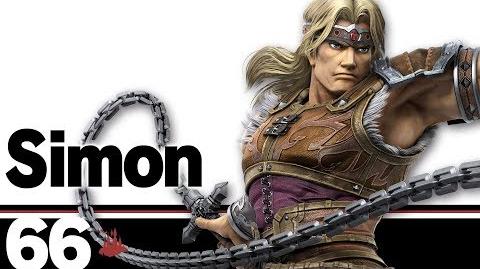 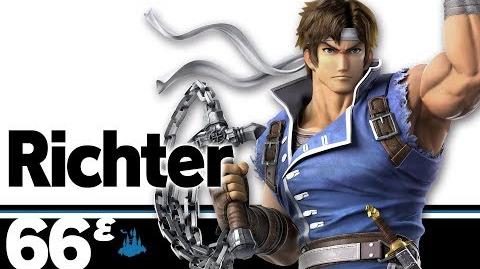 Retrieved from "https://castlevania.fandom.com/wiki/Super_Smash_Bros._Ultimate?oldid=315135"
Community content is available under CC-BY-SA unless otherwise noted.