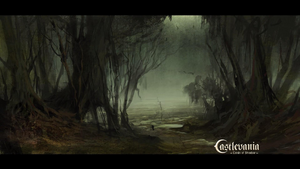 Swamps, Marshes and Bogs are common environments appearing in the Castlevania series. They are usually found as an extension of a forest, commonly being more treacherous and difficult.

The most recognizable feature of a swamp are their pools of mud. This mud will slow the player down and sometimes suck them into it, eventually killing them. In Castlevania II: Simon's Quest and Lords of Shadow, the swamps (or some areas of the swamps) are also poisonous. Mud Men also spawn from this mud or poison marsh in several games, making it even deadlier. In Order of Ecclesia, the Unes, small plant enemies, will hide themselves in the mud, making it harder to traverse the swamp's mud without taking damage. Even worse, some Mandragoras may hide under the mud as well, adding to the damage taken. In Lords of Shadow, another hazard was added, the deadly Naiad that attempts to drown Gabriel.

The enemies found in swamp areas are varied, but the most common enemies are Mud Men and Frogs, which in some games rise up from the mud in unlimited numbers. Simon's Quest also featured other enemies that came out from the swamps, such as Slimey BarSinister and Ghastly Leeches. Other wildlife, such as Crow or Owls (and their accompanying Owl Knights) are also common. Some swamps are choked with plant life, such as those in Super Castlevania IV and Order of Ecclesia. These include Unes (some which control humans, called Chosen Une, and resemble swamp creatures), Mandragoras or Maneating Plants. Unes are sometimes found hidden in mud, making them a greater threat. Jersey Devils can also be found there in Order of Ecclesia.

Retrieved from "https://castlevania.fandom.com/wiki/Swamps?oldid=264047"
Community content is available under CC-BY-SA unless otherwise noted.