The Reparation of My Heart

"Everybody lies to us. Everybody hides thing from us."
— Taka to Alucard in "Abandon All Hope"

Taka (タカ, Taka?) is a character in the Castlevania animated series. He was a vampire hunter from Japan and a former slave of the vampire mistress, Chō. Along with Sumi, he seeks the help of Alucard to learn how to kill vampires.

He was voiced by Toru Uchikado in the English version of the show.

Taka, along with Sumi, grew up in Japan as one of Chō's slaves. Chō would often make her slaves watch other slaves fight her, only to be beaten and devoured. Sumi and Taka used these shows as opportunities to learn Chō's fighting style in hopes of eventually defeating her.

After Chō was called to Dracula's castle, Taka and Sumi took the opportunity to kill her soldiers and free her other slaves. Afterward, knowing that there was nothing to prevent Chō from returning to Japan and taking more slaves, they traveled to Wallachia to find and kill her. On the way there, they ran into many seemingly nice people, only to be betrayed repeatedly, which left them with a strong distrust of others. At some point, they heard of Alucard and sought him out to learn more about killing vampires.

Roughly one month after Dracula's death, Taka and Sumi made their way to his castle, still located at the Belmont Hold, and found Alucard, who was collecting water. The plan was for Taka to cover Sumi with his bow while she talked to him, but Alucard easily apprehended both of them before she got the chance. They explained their origins and asked him to teach them how to fight vampires, to which the lonely Alucard agreed.

The two spent several days at the castle, with Alucard teaching them how to fight vampires and even showing them the Belmont stronghold. Things appeared well with the three of them seemingly growing close; however, after some time, Taka and Sumi became concerned that Alucard had not taught them any magic and convinced themselves that he was intentionally keeping information from them. One night, Taka and Sumi entered Alucard's bed chamber, and the three proceeded to have sex.

While Alucard's guard was down, Taka and Sumi bound him to the bed with silver wire and intended to execute him. They explained to Alucard that they believed he was lying to them, that they have suffered at the hands of people who abused and lied to them since leaving Japan, as well as their plans to teleport the castle back to Japan to defeat the vampires. However, before the pair could kill him, Alucard summoned his sword, cutting their throats open.

After coming to terms with the traumatic experience of the betrayal, Alucard further embraced his lonely lifestyle and impaled Taka and Sumi's corpses on spikes, which he placed in front of the castle to dissuade others from entering.

Growing up in Chō's vampire court, Taka and Sumi spent most of their lives experiencing how cruel vampires can be. Both are dedicated to killing vampires to ensure no one has to experience what they have again.

Taka is the more headstrong of the duo. He can be tactless in his actions but is also daring.

Sumi and Taka are eager to learn all Alucard has to teach, but they are impatient and eventually decide that he is standing in their way of learning all the secrets. Secretly, both are traumatized by their difficult lives and don't trust anyone. As soon as they realized Alucard was also not to be trusted, they chose to take his holdings for themselves. It is implied that Sumi and Taka secretly want personal power to build their own empire. They are consistently seeking to learn the castle's teleportation magic for this reason. They withheld their real intent and justify their attempt at Alucard's life by accusing him of being the one who withheld information from them.

– Taka: You've been lying to us.
– Alucard: I have not.
– Taka: You have. Because everybody lies to us. Everybody hides thing from us.
— ("Abandon All Hope")

– Alucard: There was a small battle.
– Taka: It must have been a legendary battle.
– Alucard: Mostly just desperate and sad.
— ("I Have a Scheme")

– Alucard: Come. Show me how you attack.
– Taka: I would, but you wouldn't let me have my bow.
– Alucard: Archers run out of arrow all the time. I want to see how good you are when it comes to a blade.
— ("A Seat of Civilisation and Refinement")

– Sumi: We should do something for him. Give him a reward.
– Taka: Can it be after I've had a nap? I've read so much, my brain hurts
– Sumi: (scoffs) So lazy.
– Taka: I'm not lazy. I converse my resources for important efforts.
— ("What the Night Brings")

Taka in "The Harvest".

Sumi and Taka after Alucard slit their throats in "Abandon All Hope". 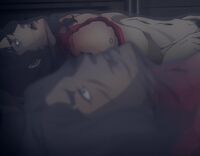 Sumi and Taka's impaled bodies in front of the castle in "Abandon All Hope". 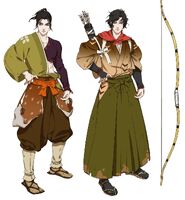 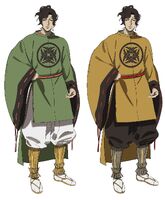