Talisman of the Dragon 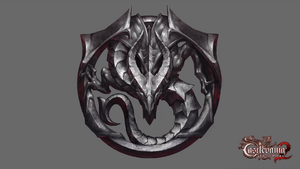 The Talisman of the Dragon, is a powerful relic in Castlevania: Lords of Shadow 2. It primarily serves as Dracula's personal emblem (as described by the Chupacabras) that will awaken his Dragon Form ability when activated. The talisman itself requires Dracula to acquire five dragon scales to activate.

This is the single most powerful relic in Dracula's arsenal, and because of its explosive power, it can only be used once before having to reacquire more dragon scales in order to access the ability again.

The talisman is first received from the Chupacabras after allowing him to open his shop and Dracula is automatically given five dragon scales to boot.

Once the talisman is used, the Chupacabras will sell up to three dragon scales in his shop so as to help save the player time in finding more scales needed to reassemble the relic.

Extinct for eons, the existence of dragons has been relegated to a mere mention in legend and myth. However, their legacy has remained latent in the blood of their ancestors and inherited by their descendants, awaiting the arrival of the chosen one to rise again. An old prophecy describes how a mysterious talisman was created in ages long past to ensure the return of the beast. Only when its centuries-old scales have been collected will the dragon be reborn...