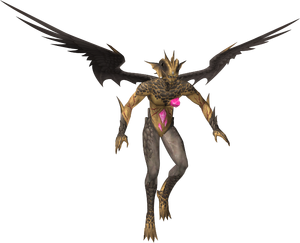 "A terrible devil, but a powerful ally -- if you can keep it under control. Fires beams from its eyes."
— Description

The End is the final evolution form of the Devil-Type Innocent Devil. This form can be obtained by crafting the Chauve-souris spear and collecting 100 green Evo Crystals using it.

Visually impressive, this I.D. evolution is very aggressive and quite effective on battle, without resorting to Hearts for special moves. It flies constantly with good speed and has a vortex-type chain attack (an attack that can be added on certain parts of Hector's combos). It can learn a new Magic Circle special ability, the Exploding M. Circle, which charges red glowing power by holding down the attack button, release to unleash a cone-shaped devastating explosion, similar to Abel's on the first battle against Isaac.

Render of The End 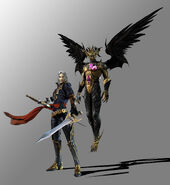 The End and his master, Hector

Kojima's concept art for The End

Retrieved from "https://castlevania.fandom.com/wiki/The_End?oldid=258851"
Community content is available under CC-BY-SA unless otherwise noted.