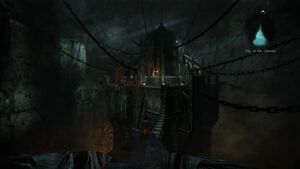 The Gorgon's Lair is an isolated chamber in the City of the Damned. Chained to the undercove of the castle, this is where the Gorgon Sisters make their keep. The area is cluttered with statues of soldiers and creatures turned to stone by the gorgons. Harpies and Dungeon Jailers are common enemies here.

Dracula, while searching for his Chaos Claws, goes in looking for the sisters. After encountering Euryale and Stheno, he learns the claws are in possession of Medusa. Upon finding them all, the cursed blood corrupts the sisters and morphs them together into the mighty Gorgon. After defeating it, the monster turns to stone to remain there forever.

Retrieved from "https://castlevania.fandom.com/wiki/The_Gorgon%27s_Lair?oldid=281869"
Community content is available under CC-BY-SA unless otherwise noted.