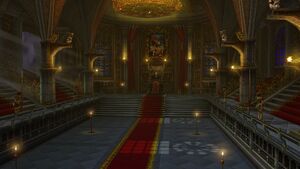 The Throne Room is a distinctive environment in the Castlevania series. The area is generally very small, sometimes conformed of only one room, and it generally lies on the highest section of the Castle Keep.

As its name implies, the throne where the Lord of the Castle commands his armies can generally be found here, although sometimes it is a vampire's coffin what's found instead.

The final confrontation against the game's main antagonist usually takes place in this chamber.

Throne Room from Castlevania Judgment
Add a photo to this gallery

Retrieved from "https://castlevania.fandom.com/wiki/Throne_Rooms?oldid=276866"
Community content is available under CC-BY-SA unless otherwise noted.